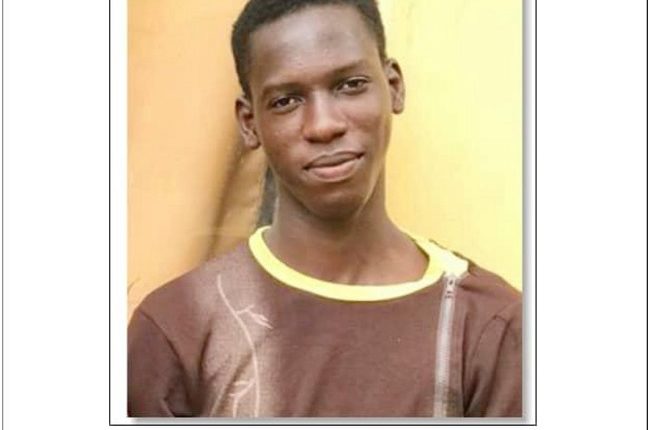 The Federal Government has been called upon to immediately conduct a transparent and independent investigation into the death of a reporter with Gboah TV, an online television channel, Mr Pelumi Onifade, who was reportedly arrested by officers attached to the Lagos State Task Force while covering the recent #EndSARS protests, and later found dead at a mortuary in Ikorodu Lagos, where his body was deposited.

A non-governmental organisation, Media Rights Agenda (MRA), made the call on Friday in a statement signed by its Communications Officer, Mr Idowu Adewale.

According to MRA, Onifade, 20, was covering the scene of a mob raid on a government facility at Oko-Oba in Agege Local Government area of Lagos State for his media organisation (Gboah TV), where he was serving as an intern when operatives of the task force stormed the scene and engaged people who attempted to loot palliatives at the Ministry of Agriculture store in the abattoir area of the state.

MRA noted that despite the fact that Onifade wore a jacket identifying him as a journalist, he was reportedly arrested and dragged away by men of the task force on October 24, 2020, and that his television station had issued a statement that the family and the media outfit he worked for had searched for him for days before they eventually discovered his body at the mortuary in Ikorodu. This is a distance of up to 20 kilometres apart.

The late Onifade, a second-year student of the Department of History at Tai Solarin University of Education(TASUED), Ijagun, Ogun State, was an intern with the television house.

Speaking on the issue, MRA’s Programme Director, Mr Ayode Longe, said “Mr Onifade’s death is one too many and is particularly ironic as he was arrested while covering protests that had engulfed the country as a result of police brutality and extra-judicial killings.

“This latest incident must not go un-investigated. The Federal Government must make every effort to establish the circumstances of his death, identify his killers and make them face the wrath of the law.”

Reminding the Federal Government of MAR’s call on the occasion of the International Day to End Impunity for Crimes Against Journalists earlier this week for the establishment of mechanisms to combat impunity for attacks and violence against media workers in order to ensure accountability for such acts and discourage future attacks, Mr Longe said “the killing of Onifade has given additional urgency to such a call.

He said in this day and age, no attack against any journalist, and certainly not the killing of a journalist, should go unpunished as such cases of impunity only breed more impunity.

Mr Longe reiterated that government should fulfil its international obligations by launching a serious and transparent investigation into all unresolved cases of murders of journalists since the 1986 assassination of the former Editor-in-Chief of Newswatch magazine, Mr Dele Giwa, and several other journalists whose deaths have not been resolved, including the instant case of Mr Onifade.

He said MRA was not only standing with the Onifade family is demanding, among other things, that the police officer or officers who killed him must be identified and prosecuted and that pending a full investigation, the officer who led the squad that arrested the young journalist should be held responsible and if he is unable to provide a convincing account of what happened after they left the scene of the arrest and show that Mr Onifade left his custody alive, should be prosecuted for the killing.

He also called for substantial compensation to the Onifade family for the wrongful killing of their son and a public apology to the family by both the Lagos State Government and the state police command.

Controversial Catholic priest and Spiritual Director of Adoration Ministry, Enugu, Nigeria, (AMEN), Rev Fr Ejike Mbaka, has taken a swipe at President Muhammadu Buhari and past leaders of the country demanding that the President should apologize to the country, especially the youths, on behalf of himself and his predecessors, for causing Nigerians so much pain… FG asked to probe  FG asked to probe

THE crème de la crème converged on Kaduna on Saturday for an epochal 50th anniversary of Arewa House, otherwise referred to as the Centre for Historical Documentation and Research. Apart from the stimulating lecture delivered by the chairman of the Nigeria Governors’ Forum (NGF) and Ekiti State Governor, Dr Kayode Fayemi, the occasion brought together a galaxy of politicians of different affiliations, academics, former top military brass and foremost traditional rulers from the entire 19 states making up the northern axis of the country… FG asked to probe

Trader calls Buhari, Okowa for help over demolition of 11 shops in Delta

Yellow fever, cause of mysterious deaths in Delta communities ― Govt