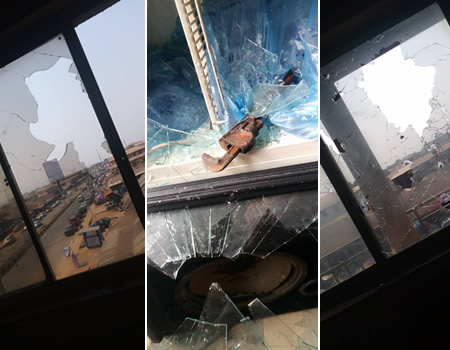 A top member of the All Progressives Congress (APC) in Edo State, Mr Henry Idahagbon, narrowly escaped assassination on Thursday as gunmen suspected to be hired assassins attacked him in his office.

This attempt which left three persons injured may not be unconnected to the lingering cold war between members of the party in the state.

Idahagbon, a former Edo State Attorney General and Commissioner of Justice said that the gunmen who came in three vehicles fired several shots at his office located on Siluko Road, near the popular Oliha Market.

The office was pockmarked with bullets while shattered window panes littered the premises of the building where the ex-Egor local government area chairman law chambers is located.

He said that he was in his office attending to his clients when he was jolted by the volley of bullet shots aimed at his office which is located on the mid-floor of the three-storey building.

Idahagbon who has since gone underground said that he quickly dashed for the back exit, through which he escaped, even as the shooting was still going on.

He said: “I was in my office, attending to some clients when I heard the echoes of gunshots directed at my office. I immediately ran out. Thank God, nobody was injured. The windows were shattered while the building is pockmarked with bullets. I have reported the matter to the police.

He said that he immediately reported the incident to the nearby Oba Market Police station where a team of policemen were drafted to assess the extent of the damage.

Tribune Online gathered that some neighbours who heard the volley of the shots, apparently from pump-action rifles ran out of their shops, unlocked and fled for fear of being hit by stray bullets.

Reports, however, had it that three persons were injured in the shooting. The third victim who was critically injured is receiving treatment at an undisclosed hospital in Benin, the Edo State capital.

One of the victims who is also a budding politician in the state, Mr Alufa Osayiniye, said he sustained gunshot injuries to his head when the hoodlums struck around 1.30 pm.

Alufa said: “I was in the office, waiting to see my leader, Idahagbon when I heard people shouting and breaking things. The next thing, I heard gunshots and as I bent down, blood came out from my head. I couldn’t identify the people. It was where I sat that I heard them scattering things and shouting.

Speaking on his mobile phone to Tribune Online, the Edo State Police spokesman, Mr Chidi Nwanbuzor, said that he was not aware of the incident, adding that, “I am not aware of any shooting. I am just hearing of it from you for the first time.”