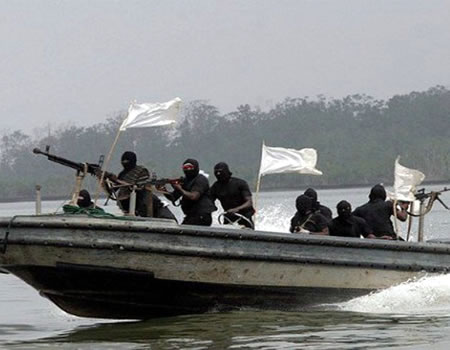 Suspected Nigerian pirates have kidnapped five Korean and a Ghanaian national from a fishing vessel, Panofi Frontier at 61 nautical miles off Cotonou waters on Wednesday.

According to an advisory notice made available to clients by Dryad Global on Wednesday, the speed boat that attacked the 64.7 by 12 metres long fishing vessel was last seen heading towards Nigerian waters after a successful raid on the vessel.

According to the advisory notice which was made available to TribuneOnline, “Report indicates that the fishing vessel PANOFI FRONTIER has been attacked by several gunmen onboard one-speed boat 61nm South of Cotonou Port.

“Following a successful boarding, the individuals left the vessel with 6 crew members believed to be 5 Korean and one Ghanaian. The speedboat was last seen heading east towards Nigerian waters.

“This is the 7th incident within the waters off Cotonou within 2020. The last incident recorded within this area was on the 14 May 20 when a vessel was approached 106 nautical miles South Cotonou.

“This represents a significant uptick in reporting within this area with only one incident reported across the same time frame within 2019 and three incidents across the whole of 2019.

“This incident appears to be the second boarding of a fishing vessel in the waters off Lome and Cotonou with the Hijack of the HAILUFENG 11 occurring on the evening of the 15th May 20.

“Perpetrators of serious maritime security incidents within this area are assessed to originate from within Nigeria and are increasingly seeking to target vulnerable vessels in waters beyond the traditional heartland of the Southern Niger Delta.”