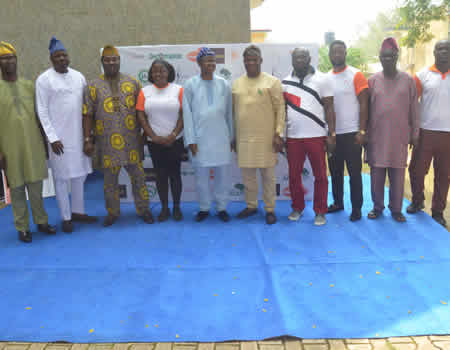 Share
The Oyo State Commissioner for Education, Science and Technology, Professor Daudu Kehinde Sangodoyin on Friday attended an interschool Biology quiz competition organised by Cell Is Life Initiative (CIL), where he restated the commitment of the State Government in encouraging Pure and Agricultural Sciences Subjects among Secondary School students in the State.
Sangodoyin who was at the event held at the Zoology Department Lecture Hall of the University of Ibadan, with some other top government functionaries hinted Nigerian Tribune of the plans of the government to enhance the performance of the State in the educational sector.
The commissioner announced that by the end of the month, the State Government will start extension classes for students in junior and secondary classes, which will be centred on Mathematics and English language.
“We are also planning to distribute a compendium of about a hundred thousand copies to Ss3 students in both public and private secondary schools. The compendium will consist of 10 subjects on the WAEC past questions of 10 years and I believe with these, by 2020, Oyo State will be among the first 10 States in WAEC ranking”, he said.

Cell Is Life, an initiative with the aim of promoting STEM Education across the nation, organized the Biology quiz competition among secondary school students from Oyo and Ogun States with Ogiogwa Osinela and Esedebe Shekinah of Orita Mefa Baptist Secondary School emerging first and second positions respectively, while Bayakly Aida of Rhema Chapel International School emerged third position.
The First, Second and Third positions were awarded winning prizes of N50, 000, N30,000 and N20,000 respectively with the payment of their WAEC examinations, while other participants were decorated with medals as a mark of participation.
The Convener of the Initiative, Sodipe  Oluwafunmilayo a postgraduate student at the University of Ibadan, said the passion to organize the programme was born out of the need to “revive the dying culture of studying Biology in our secondary schools”.
According to her, the schools and the academic body as a whole were no longer paying attention to the subject and they have started replacing it with some less important subjects. She, however, advocated that Biology Subject be brought back and be made compulsory again in our secondary schools.
The event was also attended by the permanent secretary of the Oyo State Ministry of Education, Architect Adebowale Balogun, Senior Special Adviser to the Governor on Better education delivery for all, Adeyanju Moses, Executive Chairman, Oyo State Road transport Management Agency, Akin Fagbemi among others.