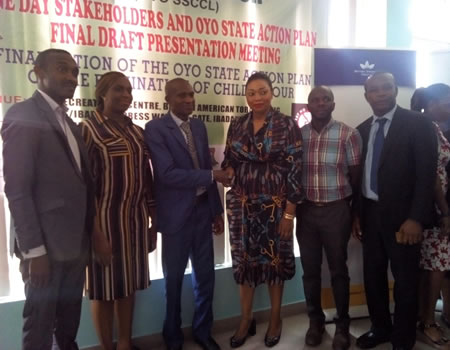 In order to ensure the incidence of child labour reduces within Oyo state, stakeholders in the fight under the aegis of the Oyo State Steering Committee on Child Labour (OYSSCCL) have called on government at all levels to encourage corporate organizations to join the fight against child labour by giving them tax waivers.

The OYSSCCL made the call in Ibadan during the presentation of the final draft of the Oyo State Action Plan for the Elimination of Child Labour in Nigeria (2017-2021) which held at the Recreation Center of the British American Tobacco (BAT) at Toll Gate in Ibadan.

The State Secretary of the committee, Mr Marcus Williams, stated that for the menace of child labour to be holistically addressed, corporate organisations must be made to show commitment by deliberately supporting the campaign since the government alone cannot curb the menace.

“We know child labour still exists, only that it is changing the face on a daily basis with many children being used for menial purposes. We believe the political will to address the menace is there in Oyo state but funding remains a major challenge. There is the paucity of funds from development partners and we need to raise fund locally.

“The draft action plan is to be presented to the relevant arms of government and w appeal to the government to see it from an angle of implementation and not something that is not achievable due to the paucity of funds,” Williams said.

Speaking on Impact of child labour responses in Agro communities, and efforts of BAT in support the fight against child labour, the Head of Leaf Operations, Mr Oluwakayode Oshodi noted that the company has been working with government at all levels and with relevant agencies to fight the scourge, adding that the company’s partnership with farmers is dependent on following a policy of what is right and education of their wards is the first point in this.

According to him, the company as a matter of policy mandated its farmers to ensure their children are educated and not used for any form of child labour especially in working on the farms by engaging the service of independent organisations to ensure that the farmers don’t use underage to work on their farms while also providing evidence that their children are in school.

He added that there is a reward system to commend right behaviour of farmers based on how well they adhere to the principles of stemming child labour on the farm, noting that annually the company also rewards farmers with things that could be of help to them on their farms.

In his presentation, Mr Eigba Gregory, the Programme Director, Galilee Foundation described the meeting as a trailblazing event going by its potentials to reduce child labour in the state, adding that with the draft document, the network now has a plan to coordinate its effort to eradicating child labour.

Gregory also appealed to the government to create a vote for those who are engaged in child labour eradication and that all such funds must be judiciously used for the purpose.

In their various presentations at the meeting, the stakeholders including government agencies, parastatals, non-governmental agencies, civil society agencies, security operatives among other harped on the place of funding in spreading the fight, especially in rural areas across the state.