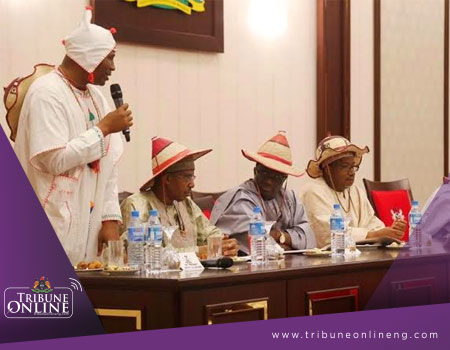 Share
The Miyetti Allah Cattle Breeders Association of Nigeria (MACBAN) Southeast zone, has said they have no issue over the position of the South east governors on how to control herders and farmers clashes in the region.
The South East Governors had in a meeting held in Enugu last week with enlarged stakeholders, among other things, restrain movement of herdsmen and their cattle from one state to another, saying it was a source and point of conflict with the natives and farmers.
The meeting also resolved to restrain the movement of cattle and herdsmen from the community to communities across farmlands, as well as banned herdsmen who move about with AK 47 guns and cutlasses and asked security agencies to implement same.
Speaking in an interview with Tribune Online in Awka, on Wednesday, the South East zonal Chairman of MACBAN, Alhaji Giddado Sadiq, said it was a welcome development, since the governors were Chief Security of their respective states and took the measure to solve them.
“We are their subjects also. We have to abide by that. They have accommodated us. They are accommodating us. We don’t have problem with them. It won’t affect our businesses. They can facilitate our business,” he said.
On ban on herders from using guns and other sophisticated weapons, Sadiq said the MACBAN equally placed ban on it, because it was against the constitution of the country.
He also disputed the allegation that herders in the zone were immigrants, adding all the Fulani cattle rearers in the whole South East are bonafide Nigerians.

The MACBAN zonal boss further announced that cattle menace committee in Anambra state has embarked on enumeration or data capturing of cattle breeders in the state for safety and peaceful coexistence with farmers.
“The data capturing is to ensure that all herders in Anambra state and their locations are known. This with help for easy identification and tracking whenever the need arises.
“You know there are instances in the country where the farmers and herders crash and no one can identify those involved. With this data capturing, one can easily identify those involve.
“We have cattle menace control committee in Anambra, Peace and security committee in Enugu, cattle resolution committee in Ebonyi, and other measures in Abia and Imo states.
“These committees adopted different measures that enhance peaceful coexistence of farmers and herders. With this, once there is a former complaints of the destruction of cattle or farmlands, the committee will access and evaluate the level of damages done, then the person or persons involve will pay adequate compensation to those whose cattle or farmlands were affected. But if the person involve is not identified, the leadership of Fulani or President-General/tradition ruler of the community will pay as required,” he stated.