Should babies, children get routine vaccines during coronavirus pandemic? 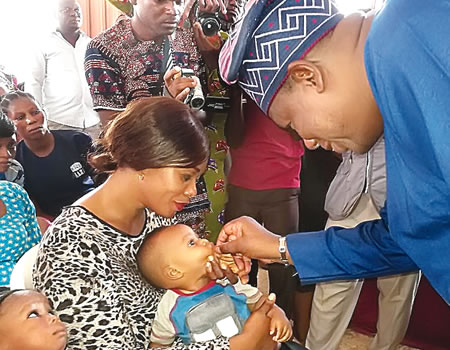 With disruptions in immunisation services due to the COVID-19 pandemic, experts in this report by SADE OGUNTOLA say that the fate of millions of young lives “hang in the balance” because of the likely disastrous surge in childhood deaths.

It’s World Immunisation Week, but there’s evidence that vaccinations are down as checkups get postponed or skipped due to worries about getting exposed to the new coronavirus.

Alake Adesina, 25, from Oyo town, initially decided not to take her three-year-old son, Felix, for a vaccination appointment in March because she was worried about COVID-19. Maintaining social distancing and physical distancing when attending the clinic, she realised, would almost be impossible.

The children’s immunisation clinic at Adeoyo Maternity Clinic was a shadow of itself. The clinic space normally crowded with mothers and babies had only a few people. The usual songs and health talks by nurses were absent. The nurses wanted to quickly vaccinate the few babies and send them home.

“We have not stopped giving vaccines but we have challenges in some areas. For instance, we have challenges with Fulani’s at Baasi and Atisbo local government areas because of some misinformation on radio. They expressed concerns on letting their children take the vaccines,” said Mrs Eunice Nihinlola, Oyo State Immunisation officer, Primary Health Care Board, Oyo State.

Tuesday is observed as immunisation day in many clinics and the clinic is always full. However, Mrs Nihinlola said the number of mothers who came to get their children vaccinated had reduced despite health educators moving around to encourage them to bring their babies for immunisation.

At the clinic, facilities were provided for hand washing and social distancing. As soon as the mothers came in, they were attended to promptly to ensure that not too many people were in the clinic at once.

According to Mrs Nihinlola, “ensuring that children don’t miss their immunisation is important to ensure they are protected from vaccine-preventable illnesses during this COVID-19 pandemic.”

Vaccination can prevent outbreaks of other diseases while in the midst of the pandemic. Vaccines help children build antibodies against any of the diseases if they were to come into contact with them later on.

Every year, more than 116 million infants were vaccinated, or 86% of all children born globally. But there are still more than 13 million children around the world who missed out on vaccination. But that number will increase because of COVID-19.

Even when services were in operation, some parents and caregivers prevented their children from getting vaccinated because of concerns about COVID-19. And myths and misinformation about vaccines are adding fuel to the fire, putting vulnerable people at risk.

“It is a big challenge because if they go to the same hospital where potential COVID-19 patients were, then, there is a potential risk.  Some individuals already infected with COVID-19 will not show symptoms although they keep spreading the infection,” said Dr Ogunbosi, a consultant paediatrician, University College Hospital (UCH), Ibadan.

Dr Ogunbosi added, “We understand the challenge, but we just have to re-establish services and proceed with caution while maintaining all the usual contact precautions, infection and prevention control modalities such as distancing, cough etiquette and handwashing.”

Data from the Nigerian National Demographic Health Surveys (NDHS) show that non-immunised children in 2003, 2008, and 2013 were 27 per cent, 29 per cent, and 21 per cent, respectively. The NDHS 2008 report indicated that overall, 23 per cent of children aged between 12 and 23 had months received all vaccinations at the time of the survey.

Immunisation is for people that are well. If a mother has a sick child, she is compelled to take the child to the hospital because she will be worried.

Full and timely completion of routine immunisation at the right time remains a challenge. The woman needs to put it in mind amidst other things that are competing for her attention.

He stated: “Once mothers miss one immunisation schedule, they are likely to miss others. They get the impression that it is not so important after all, that they can go without having it or assume that vaccine doesn’t work and they forget about it.”

There is immunization catch-up, but it is fraught with risks. If a child is supposed to be protected and he does not get that protection, in the interval between that mixed dose and the necessary next dose, the child can have an infection and that can be quite devastating.

Dr Ogunbosi declared that all children that miss their immunisation schedule are vulnerable.

“All these vaccines are important and if a child does not get the necessary cover that child is vulnerable. If a child that is supposed to have measles immunisation at nine months does not get it and he gets measles,  that is bad business. It is as bad as another child that should have diphtheria and pertussis (whooping cough) starting at two months,” he declared.

Professor Adebola  Orimadegun, a consultant Paediatrician at University College Hospital, Ibadan said the approach to tackle the COVID-19 pandemic has disrupted normal public health intervention like immunisation because “people are afraid of their children being injected or given anything orally apart from food that they know the source.”

Moreover, Professor Orimadegun said, unlike past vaccination weeks, immunisation campaigns have stopped because of the lockdown that had restricted movement.

He declared that the access to vaccines through life-saving is worse off in hard to reach areas in Nigeria, being a vast and highly populated country.

Making its call at the start of the 2020 edition of World Immunisation Week, UNICEF said on Saturday that given the current disruptions caused by the world rush to slow the spread of COVID-19, this could create pathways to disastrous outbreaks of vaccine-preventable childhood diseases in 2020 and well beyond.

They stressed that protecting communities and health workers where coronavirus risks are high “should not mean that children permanently miss out”.

At least 21 countries are reporting vaccine shortages due to border and travel restrictions, WHO Director-General Tedros Adhanom Ghebreyesus said during a press conference at the agency’s Geneva headquarters. “The tragic reality is children will die as a result.”

Widening pockets of unvaccinated children led to alarming measles outbreaks in 2019, including in high-income countries like the US, UK and France. Meanwhile, among low-income countries, the gaps in measles coverage before COVID-19 were already alarming.

The recent drop-off is worrisome because it follows a wave of vaccine resistance dating to the late 20th century. The refusal of some parents to vaccinate their children on health and religious grounds has led to a return of infectious diseases, including of life-threatening diseases like measles and polio, that had been eradicated or nearly so.

Indeed, coronavirus is a reminder of the urgency of getting children immunised against many potentially life-threatening and deadly diseases. When vaccination coverage goes down, more outbreaks will occur.

The greatest challenge to respect and love in marriage

Nigeria COVID-19 survivor: ‘An experience I don’t wish on anyone’