Latest NewsTop News
By Ebenezer Adurokiya | Warri On May 18, 2019 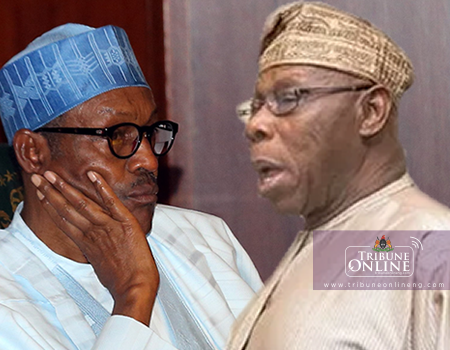 Share
Former President Olusegun Obasanjo, on Saturday, advised the Federal Government of Nigeria to summon local stakeholders as well as go global in seeking solution in the fight against terrorism.
This is just as the Owu Chief has asked the FG to take the issue of insecurity seriously at all levels and address it at once “without favouritism or cuddling.”
Obasanjo, who spoke on the topic, “Mobilizing Nigeria’s Human & Natural Resources for National Development and Stability, ” gave the suggestion on Saturday at the 2nd Session of the Synod held at the Cathedral of St. Paul’s Anglican Church, Oleh in Isoko South Local Government Area of Delta State.
The former Head of State also advised the Buhari-led government to wriggle itself out of the temptation of over-borrowing and consequent devaluation trap.
“What have we gained from moving Nigerian currency value from one naira to almost two dollar to N360 to one dollar in one generations’ impoverishment?” he asked.
On insecurity, the elder statesman said “Every issue of insecurity must be taken seriously at all levels and be addressed at once without favouritism or cuddling.
He accused the FG of allowing the Boko Haram and herdsmen issues to fester by treating the issues with kid gloves.
“Both Boko Haram and herdsmen acts of violence were not treated as they should at the beginning.
“They have both incubated and.developed beyond what Nigeria can handle alone. They are now combined and internationalized with ISIS in control.
“It is no longer an issue of lack of education and lack of employment for our youths in Nigeria which it began as, it is now West African fulanization, African Islamization and global organized crimes of human trafficking, money laundering, drug trafficking, gun trafficking, illegal mining and regime change.
“Yet, we could have dealt with both earlier, and nib them in the bud, but Boko Haram boys were seen as rascals not requiring serious attention in administering holistic measures of stick and carrot.
“And when we woke up to the reality, it was turned to industry for all and sundry to supply materials and equipment that were already outdated and that were not fit for active military purpose.
“Soldiers were poorly trained for the unusual mission, poorly equipped, poorly motivated, poorly led and made to engage in propaganda rather than achieving results.

“Intelligence was poor and governments embarked on games of denials while paying ransoms which strengthened the insurgents and yet governments denied payments of ransoms.
“Today, the insecurity issue has gone beyond the wit and capacity of Nigerian Government or even West African Governments,” he averred.
While proferring solutions to the current insecurity, Obasanjo, however, said the government seek global and multidimensional approaches to tackling the menace.
“Government must appreciate where we are, summon each group that should make contributions one by one and subsequently collectively seek the way forward for all hands on deck and with the holistic approach of stick and carrot.
“There should be no sacred cow. Some of the groups that I will suggest being contacted are: Traditional rulers, past heads of Service Chiefs (no matter how competent or incompetent they have been and how much they have contributed to the mess we are in), past heads of paramilitary or organizations, private sector and civil society.
“Others are community leaders particularly in the most affected areas, present and past governors, present and past local government leaders, religious leaders, past Heads of States, past Intelligence Chiefs, past heads of Civil Service and relevant current and retired diplomats, members of the opposition and nay groups that may be deemed relevant.
“After we have found an appropriate solution internally, we should move to bilateral, multinational, regional, continental and global levels. With ISII involvement, we cannot but go global.
“Without security and.predictable stability, our development, growth and progress are in period.
“Let me hasten to add that we must be at the appropriate seat at the table of international discourse, deliberations, agenda and action,” he reiterated.
Meanwhile, speaking on the theme for this year’s synod: “Work, Night Comes taken from John 9: 4 & 5,” the Bishop of Ughelli Diocese, Rt.Rev. John Aruakpo urged the congregation to serve God while they’re still alive, stressing that, ” no one knows where, how and when death will meet him/her.”
The cleric, who acknowledged the presence of dignitaries, commended former President Obasanjo for honouring the Church’s invitation to attend the 2019 synod.

May 29: There is plot to cause mayhem, Lai Mohammed insists