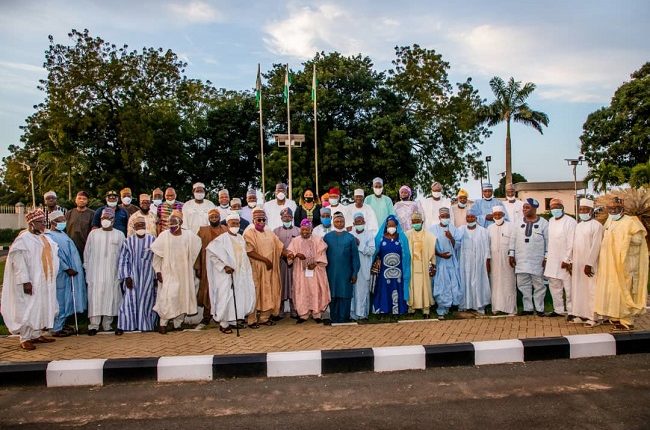 Governor Abdulrahman Abdulrazaq of Kwara State has met with leaders of thoughts in the state on the current socio-economic and security situation, urging them to join the government’s efforts to calm frayed nerves and ensure that the country is not brought down.

The meeting came barely two days after the governor held a similar parley with first-class traditional rulers in the state, and a week after holding a state security meeting on the goings-on in the state and across the country.

“It is time to speak with one voice that we should resolve our grievances without burning down the country.

“The #EndSARS protest started well and the protesters are within their right to express their grievances. However, all indications point at the fact that what started as a peaceful protest has been hijacked by some other interests,” he told dozens of APC and thoughts leaders in Government House in Ilorin.

“We need to ensure that our state remains peaceful as it has been. The protest here has been very peaceful and I even joined them, except for a pocket of unfortunate incidents which are now under control. Now is the time to disallow persons with selfish interests from causing harm to our country. Let us speak to our younger ones to give peace a chance. We should not bring down our country. I urge you to use your influence to talk to the people on the imperative of peace.”

He referenced how nations like Liberia, Libya, and Egypt and Syria have not recovered from their civil wars which crippled their economies and rendered their citizens as refugees in other countries of the world.

“We really do not want something like this to happen to us”, he said.

He also briefed the elders on the minimum wage saying while the state government is willing to pay, signing onto the table that the labour wants would eat too deep into the public purse and make spendings on infrastructural development and the rest of the population impossible.

ALSO READ: How The Nation headquarters was attacked, burnt by gunmen – Editor

AbdulRazaq, however, said both parties would return to the negotiating table to again see what is practicable and would benefit both sides.

He also explained how the administration officials and lawmakers, including himself, have been denying themselves of lawful perks of the office such as official vehicles and accommodation just to free up resources for rehabilitation of basic amenities for the people.

The party and thoughts leaders took turns to commend the governor for his “handling of the #EndSARS protest” in the state while also calling on him to continue to engage with various stakeholders to let his message reach the grassroots.

Kwara APC Chairman Bashir Bolarinwa commended the governor for his efforts on the security situation, saying the party leaders would take his message to the grassroots and rally the people behind the administration’s efforts.

“We have heard Your Excellency and we would now spread our tentacles across the state to spread the message. We all have that obligation to keep peace in our areas. Having also listened to you on the state of our finances and what you are doing, we will also talk to the labour unions on the need for us to face the realities,” he added.

Senator Ahmed Mohammed, who also commended the decision of the governor to again speak with leaders across the state, called for deeper synergy with the security agencies as well as the invocation of relevant laws to curb some security challenges.

“All of us must be security conscious. We can’t leave the issue to the government alone, so we need to come together to ensure we keep the peace in our state and curb any escalation,” he said.

Alhaji LAK Jimoh, for his part, said the meeting was a right approach to get the buy-in of every stakeholder in ensuring peace in the state.

“The meeting serves to give great insights into issues affecting our state. It is time for all of us to join hands with the government to ensure security and industrial peace in Kwara. We are glad however that the governor has handled the #EndSARS protest in a commendable way,” he said.

Chief J.B. Ayeni commended the governor for the efforts being made to improve social amenities and set the state on the path of growth, calling on members of the public to cooperate with the government.

Iyaloja of Oyo State dies at 86