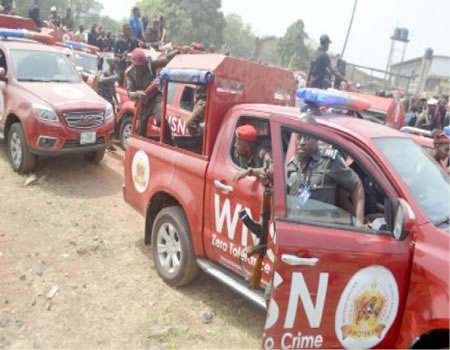 A combined security team of the Joint Security Task Force in Oyo State otherwise known as Operation Burst and Western Security Network code-named Amotekun on Sunday stormed forests in Abaa, Surulere Local Government Area, Oyo in search of the killers of the final year student of the Ladoke Akintola University of Technology (LAUTECH), Ogbomoso, the hotelier and one other person.

Community dwellers became apprehensive with the heavy presence of the combined security team on Sunday.

Our correspondent gathered the security invasion has led to the arrest of some suspects while arms and ammunition have been recovered.

A hotel within the community which is suspected to be the base for the criminals has been allegedly destroyed.

Also, a  makeshift shop by a tea vendor popularly known as “Mai tea” was said to be used as an armoury by some of the criminals and some guns and bullets hidden there were reportedly uncovered by the security agents.

The commandant of Amotekun Corps in Oyo State, Colonel Olayinka Adeyanju, when contacted told journalists that “a clearance operation is going on in the area.”

Recall that gunmen had on July 28 abducted a hotelier, Mr Olugbenga Owolabi; a final year student of LAUTECH, Rachael Opadele and killed them after collecting a N5 million ransom.

Meanwhile, a former military governor of Oyo State, Major General Oladayo Popoola; Justice Afolabi Adeniran and  Dr Saka Balogun, will be leading other prominent indigenes of Ogbomoso, as well as the youth of the town in a peaceful protest on insecurity in the town on  Monday.

The president of Ogbomoso Community Youth Forum, Rev. Kayode Olaleye, said in a statement made available to journalists that the awareness rally was to sensitise the people on the security situation and to be vigilant.

The statement read, “In view of the deteriorating security situation in Ogbomoso zone, as evident in recent waves of kidnapping for ransom and killing of victims, the Ogbomoso Consultative Council led by Major General Oladayo Popoola OFR (retd),  Justice Afolabi Adeniran (retd) and Dr Saka Balogun in consultation with the elders of the community and in conjunctions with the youths (under the aegis of the Ogbomoso Community Youth Forum,  will be holding a rally to create awareness on the fear-inducing phenomenon.”