•Calls for disqualification of both by electoral body •We're not surprised with PDP •Characteristic, seasonal blabbing ― APC 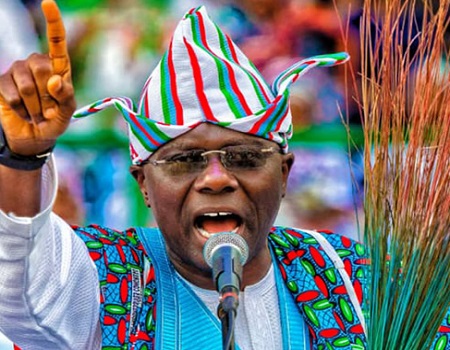 Lagos State chapter of Peoples Democratic Party (PDP), has accused Governor Babajide Sanwo-Olu and his ruling All Progressives Congress (APC) in the state of commencing reelection campaigns ahead of the statutory timetable yet to be released by the Independent National Electoral Commission (INEC).

The party made the accusation on Sunday in a statement made available to newsmen by its spokesperson, Mr Taofik Gani, calling on the INEC to suo motu disqualify him as a person and his party, APC eligibility to contest the governorship in the 2003 General Election.

PDP urged the electoral umpire to assert its authority and control of the electoral process by enforcing its rules irrespective of whosoever must have been breaking the rules, adding that “INEC must also go after all the persons and associations behind the illegal campaigns to arrest and prosecute them for the electoral offence in line with the electoral Act.

“Governor Sanwo-Olu and the APC are already violating the political process. The level playing field that ought to exist is being dug into gullies for all other parties. This is unfair. The INEC must speak out. Sanwoolu must stand disqualified. The INEC must not stand silent and indifferent. This is fundamental to the delivery of fair, credible, acceptable elections in Lagos state,” PDP said.

According to the party, doing this “will show the INEC as serious to fairly manage the 2003 general elections, noting that her outcry and demand is on the heels of the deliberate public announcements, jingles, newspaper adverts directly and indirectly sponsored by the governor, his supporters, groups and the APC announcing Sanwoolu as a performer-governor within his first year in office and the call that he should be supported for reelection.

The Lagos PDP described the assessment as indeed laughable and vowed to, in the coming days expose Sanwoolu first year in office as being the worst ever by any Lagos State governor and a year of the abysmal performance of monumental failure.

“For clarity, the sponsored public announcements, jingles, newspaper adverts are clearly calling on electorates to reelect Sanwoolu and the APC on the basis of their perceived performances within the first year.

“These jingles and other announcements abound. We demand that the governor and the APC must be disqualified from contesting the governorship elections in the 2003 general elections. They are already overreaching all other aspirants and parties,” the party stated.

But in a swift reaction, the state chapter of APC said it was not surprised by the discomfort of the opposition PDP, who it said was “left in awe of the commendable performance of the Lagos State governor, Mr Babajide Olusola Sanwo-Olu, who has excelled in all ramifications barely a year into his four-year tenure.”

The party said this in a statement issued by its publicity secretary, Hon. Seye Oladejo, noting that such stance had become “characteristic and seasonal blabbing of the opposition PDP in Lagos State on some imaginary flouting of electoral rules and guidelines.”

APC, while insisting that the rantings of were unexpected, argued that the rising profile of Governor Sanwo-Olu “should give the moribund opposition party some headache especially the Lagos State government internationally acknowledged response to the novel COVID 19 pandemic.”

According to it, Sanwo-Olu “has not only provided the desired leadership at an unprecedentedly trying time, he has become a reference point for responsive and responsible governance,” adding that it was also worthy of note that other important sectors had not suffered neglect as a result of the pandemic challenges.

The party said Governor Sanwo-Olu remained focused on delivering on his electoral promises to Lagosians and refused to be distracted by idle politicking as displayed by PDP, noting that it would not as a serious platform poised to meet the needs of Lagosians, dignify the press statement from the leading opposition party, describing such as its usual tantrums and a distractive politics which amounted to nothing.

“We need to emphasize that the commencement of 2023 elections only exists in the warped, mischievous and idle imagination of the opposition PDP.

“We regard the press statement by the PDP as their usual tantrums, distractive politics and sound and fury meaning nothing.

“We will not dignify such unsubstantiated issues any more with a response as a serious party that’s busy with meeting the needs of our people.