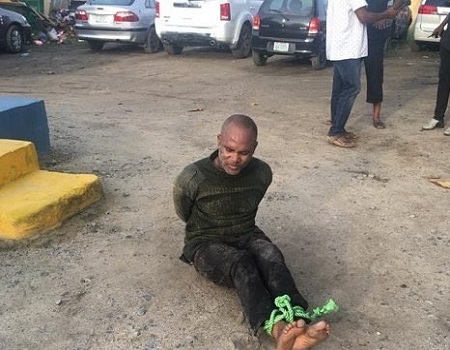 A police inspector in Lagos on special duty from Abuja early on Sunday went berserk and killed a police sergeant, who had come for the same duty with him.

The deceased sergeant, the killer cop and others were until the incident serving at a Federal Government facility in Ikoyi, where they were posted from Mopol 21 Squadron, Abuja.

An argument was said to have ensued between them early on Sunday morning when the senior officer, Inspector Monday Gabriel opened fire at the officer.

Inspector Gabriel reportedly continued the shooting and was escaping with a vehicle, when he was arrested by the police.

The image maker in charge of the state police command, Bala Elkana confirmed the incident and added that the police inspector had been arrested.

Elkana said, “On 31/5/2020 at about 0430 hours, Area A Command received a distress call that one Inspector Monday Gabriel from No 21 Police Mobile Force Squadron Abuja, on special duty in a Federal Government facility in Ikoyi Lagos went berserk and started shooting sporadically.”

He added that “one Sergeant Felix Okago, who was on special duty with the inspector, died from the gunshot injuries while others escaped unhurt.”

“In an attempt to escape, he took a patrol van and headed towards Third Mainland Bridge, shooting as he was escaping.”

He also continued that “he was intercepted by policemen from Bariga Division along Akoka, disarmed and handcuffed. The rifle and vehicle were recovered.”

According to Elkana, “the corpse of the deceased sergeant was deposited in the mortuary for autopsy while the inspector was taken to a police hospital for medical examination as he presented signs of mental depression.

Tinubu commiserates with Buhari over death of nephew