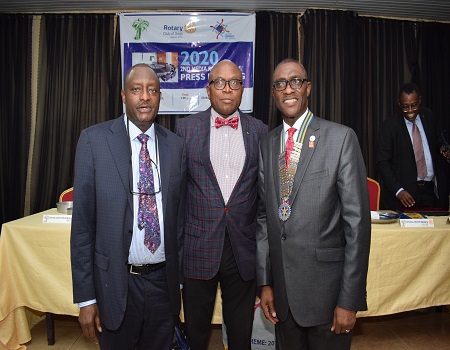 Despite the harsh economic condition in the country, the Rotary Club of Ikeja (District 9100), Lagos, has been able to execute in one-year various projects worth over N25 million to impact many lives and communities in its area of operations.

The president of the club, Mr. Olumuyiwa Fagbola, gave this hint at a media forum to highlight some of the projects the club executed so far since he assumed office in June 2019.

He said the sole motive of Rotary Club globally is to cater to less privileged individuals and vulnerable, and also under-served institutions and communities in the society.

While noting that the club has only six areas of focus under the current administration globally, he listed the areas to include education and literacy, maternal and childcare, water and sanitation, economic and community development, disease prevention and treatment, as well as peace and conflict resolution.

He pointed out that many public schools in the state including Ikeja Senior High School; Shogunle Primary School; and Modupe Cole Memorial Child Care and Treatment Home, Yaba, and so forth, as well as general hospitals and LASUTH and no fewer than 35 taxi drivers are part of the beneficiaries of the club numerous projects.

“We refurbished block of classrooms with sickbay at Ikeja High School and at Shogunle Primary School. We also donated library, food and other consumables to Wasimi Community High School, Maryland; Modupe Cole respectively,” Fagbola noted, adding that the club equally empowers some Airforce officers’ wives with vocational skills and tools and also offered a scholarship to some indigent students.

On water and micro-credit schemes, he said the club was able to provide safe water for use at Ikeja Army Cantonment and part of Agidingbi community, and also empowered some youths and market men and women at Isolo Market with some start-up funds which they have already been utilizing in their trades and vocations.

He said all these projects gulped more than N25 million and that with education alone took almost half of the amount, adding that it would have been more but for members who are professionals doing parts as self-helps.

While Fagbola commended club members for their generous giving notwithstanding the economic hardship in the land and urged them to do more as more many people out there need help, he urged the beneficiaries of various projects to make not only the optimal use of them but also to maintain them well.