• As court awards N200,000 cost against FG for delaying trial 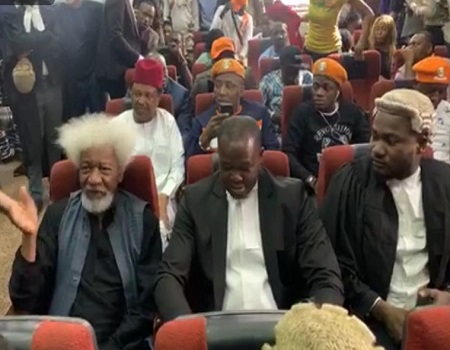 The convener of #RevolutionNow protest, Omoleye Sowore and Olawole Bakare were, on Wednesday, re-arraigned on a two-count amended charge before Justice Ijeoma Ojukwu of the Federal High Court, Abuja.

Sowore and Bakare were initially standing trial on a seven-count charge before the Federal Government amended the charges, reducing them to two, which borders on treasonable felony.

When the matter came up on Wednesday, the Prosecution counsel, Aminu Alilu, informed the court that the Federal Government has filed the amended charge but have not served it on the defendants and prayed the court for a short adjournment.

He said that since the matter was earlier fixed for February 12 and 13, 2020, the court should oblige his request for an adjournment till Thursday, February 13, 2020, to enable him to serve the defendants with the court processes in the matter.

In his response, the defence counsel, Adeyinka Olumide- Fusika (SAN), said that the trial could not commence today as promised by the prosecution because they have not served the defendants with the proof of evidence and other documents in line with the court earlier order.

In the circumstances, he applied that the seven-count charge should be struck out for lack of diligent prosecution and added that the defendants, who are restricted to Abuja have been subjected to severe punishments, though they have not being convicted.

He said the prosecution has exhausted the five adjournments allowed by law and that in the interest of justice, the charges should be struck out.

Olumide-Fusika said until the prosecution serves the defendants with the required documents, including the proof of evidence, the trial will not commence.

In her ruling, Justice Ijeoma Ojukwu noted that the office of the Attorney General of the Federation had, last year December, took over the prosecution of Sowore but only filed an amended charge on February 12, 2020.

She further observed that the prosecution has not obeyed an earlier order of the court directing it to serve all the necessary documents on the matter on the defendants.

She said the delay was uncalled for in view of the fact that the court has granted an accelerated hearing of the matter, adding also that the delay must have a consequence and awarded N200,000 cost against the prosecution.

According to the court, the counsel must effect the payment of the cost to the defendants before tomorrow’s trial.

She said the prosecution on whose instance the matter was adjourned have exhausted its five adjournments allowed by law.

The first count on the amended charge accused the publisher of the Sahara Reporter and his co-defendant of conspiracy to commit treasonable felony, contrary to section 516 of the Criminal Code Act, Cap C38 Laws of the Federation of Nigeria, 2004 and punishable under the same section of the Act.

Count two accused them of committing a treasonable felony, contrary to section 41(a) of the Criminal Code Act Cap C38 Laws of the Federation of Nigeria, 2004 and punishable under the same section of the Act.

Oyinlola: It’s not too late to save Nigeria from Boko Haram, bandits