Review of Jim Collins and Jerry I. Porras’ Built to Last 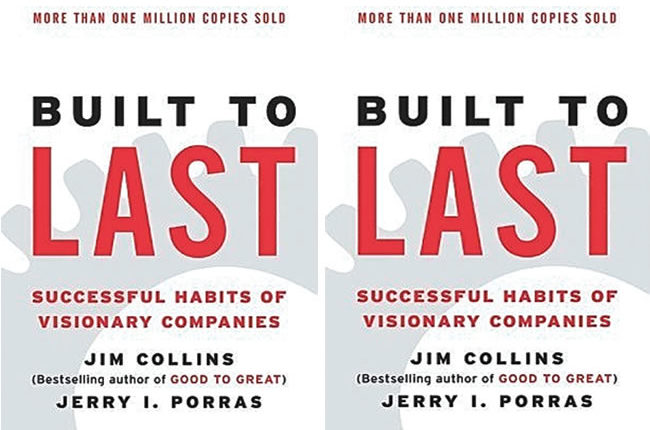 The main premise of Jim Collins and Jerry I. Porras’ Built To Last is a comparative study – a comparison between great and good organizations. Collins has accordingly identified 18 great performing companies (“The Best of the Best”) from different industries that have stood the test of time and leadership, have undergone change and innovation often moving away from their comfort zone, have seen several product life cycles etc. and have compared them with organizations that have an excellent track record of performance but have not been able to distinguish themselves. The one element that separated the ‘great’ and ‘good’ performers was the vision that each of these 18 leading organizations had, and that’s what he elaborates in this book.

So what is Built To Last all about?

In a nutshell, the book discusses why certain organizations are able to endure challenging situations across generations and last, while others are not. Visionary organizations have been able to distinguish themselves and Built To Last defines what makes them different.

A visionary organization has a purpose for existence. Though there are other factors like timing, great system, perseverance etc. that make a great company, it’s the right purpose that distinguishes them. And this purpose often breaks the paradox of profit-making. Though profits are important for sustenance, money singularly is not the reason for existence. The case of the pharmaceutical company Merck is the best example of how such companies have held on to their vision even in the face of adversity and no-profits. Merck developed the drug Mectizan to cure river blindness. But even when they didn’t receive much aid, they didn’t move away from the initial purpose of providing medical assistance when required. They distributed millions of doses of Mectizan, thus holding true to their purpose, even without profits.

Another factor that makes a great company is that they have two or three core ideologies or principles that they hold on to. For instance, IBM was unable to hold on to their core principles, hence leading to their subsequent non-performance.

Experimenting is another factor that is a key indicator – “Visionary companies make some of their best moves by experimentation, trial and error, opportunism, and- quite literally- accident.” It has been identified that visionary companies don’t miss on any opportunity to experiment and try something new. We all know how this works at the electronics giant is known for trying new technology and encourages the culture of innovation. The same can be said of 3M – a company ready to experiment as long as they are aligned to its core ideology i.e. it must be a new idea and serve a human problem. Among contemporary organizations Apple and Google’s names tops the list.

The ability to identify leaders so as to carry on the legacy of the organization is another important factor. CEOs and other leaders must to able to build a definite succession plan so as to train people when they are no more. For instance how many of us actually know the current CEO of Disney? What works is the image that Disney has created and working towards through the years and changing leadership. The reverse is the case with a company like Apple. Though the company is in safe hands and is doing great business, it lacks the craze that was created by Steve Jobs.

For succession planning, though the author supports the idea to get someone from within – I am personally not in support of it completely. I do believe that succession planning is necessary but not always from within the company. There are times that we require people with a global perspective. Built To Last is essentially discussing success stories of companies in America. But the market today has significantly moved to the global arena. In my opinion therefore, limiting to regional knowledge and expertise can often prove limiting.

And last but not the least, it breaks conventional myths about building an organization. In the section “Clock Building, Not Time Telling” it breaks the myth about having a great idea for starting an organization. It takes up the cases of Sony and Hewlett & Packard – both ‘visionary companies’ – but neither knew what they were going to make when it started off. What it tries to say is that you will have to make the start, face failure and then figure out what to do.

Now Is The Time To Invest In Your Leaders