Re-appointment of Emefiele: A choice for continuity and strategic growth, rather than sentiment

President Muhammadu Buhari’s reapointment of Godwin Emefiele as Central Bank of Nigeria, CBN has been hotly debated since the news of the decision broke.
It has pitched Nigerians on a variety of opposing sides of arguments with some believing above other things that President Buhari has cemented the broken conscience of Nigeria to remain united.

Those of us in the Senate knew all eyes were on our committee saddled with the responsibility to either approve or reject the President’s decision.
Our committee met with Emefiele on Wednesday, May 15 and all members of the panel cleared him for reappointment. As a member of the committee, I cannot deny that there was some pressure.

But since the news broke that Emifiele would be in charge for another five years, my role and that of other members of my committee seem to have suddenly become one that needs some explaining. So, let me break it down for all the people of my senatorial district and indeed all Nigerians to whom we all owe an explanation of our stewardship. 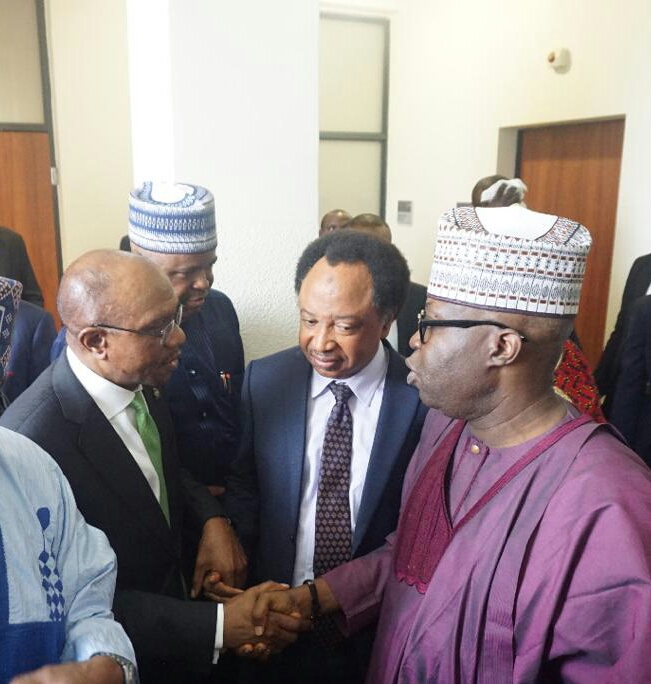 This time round, like never before in the history of our country, we need continuity to get the Nigerian economy revived and flourishing the way we dreamed of it.
Two years ago, we found ourselves in a recession – a terrible experience for all Nigerians, regardless of status, especially business owners and those working in the private sector.

Never shall we forget the number of jobs that were lost during this tough months, and every Nigerian would admit that becoming the CBN Governor at that time was not one of the easiest jobs.
At Senate committee level, I was one of those who championed the cause to prevent the sale of the country’s assets to finance the 2017 budget.

We argued at the time that Nigeria must find a way to get out of that recession without selling our assets. We put our foot down, the executive listened to us and eventually they found other means to tackle the recession.
We managed to slightly come out of the recession and we can feel that ray of hope across the major sectors of our economy, from agriculture to the tech industry, a situation that has come to justify our policy recommendation.

Nigeria always comes first in our decisions, and when the economy is concerned, it is always time to throw away all political, ethnic, religious and personal sentiments.
Whether we like him or not, Mr Emefiele was one of the persons who helped Nigeria to come out of the recession. He managed to achieve stability in foreign exchange and ensure its availability.

Many Nigerians would ask, how have his policies and the economic jargons being thrown around affected them and I can understand the resentment.
However, the CBN under Godwin Emefiele must be among the best in terms of social intervention; programmes with proven impact on the everyday Nigerians.

Let us look at their interventions in the area of agriculture. Sincerely, the results are seen all over the six geopolitical zones and can only get better with consistency.
As students of history, the past has shown us that policy summersault has been one of the major problems of Nigeria’s economic growth.

Yes, innovation, fresh ideas, improved policies are some of the words Nigerians have thrown at us and rightly so, but we should see reasons with the President’s rationale that this is not the time to bring in a new man who would want to start his own ideas and try to impress Nigerians.
The media and many informed Nigerians have also asked questions regarding Emefiele’s integrity, especially on the back of recent allegations of illegal transactions levelled against him.

They say, how come these allegations were not brought to the fore, especially in a government that has ridden on its anticorruption mantra? How can a public office holder who has been accused of running offshore accounts be the first CBN governor during the democratic era to get a second term in office?

I assure Nigerians that all these issues were considered in our screening processes and I make bold to state that nobody has come forward with empirical evidences to validate these allegations.
It will be unfair for the Senate committee to rely only on hearsay to deny Nigerians the continuity needed to make their lives better.
While the screening was ongoing, I received many messages from concerned Nigerians across the country. Most of them wanted us to ask why he is perceived to be gagging the press.

I immediately engaged him on this allegation that his office tries to silence the media and he defended or shall we say exonerated himself by saying such questions can only be answered by his corporate affairs. For those of us in the legislative arm of government, Nigerians need to remember we are not prosecutors. So, we can only demand clear evidences to prove that a man is guilty before we condemn such citizens.

We are not an investigative body as well. So, the burden of proof is upon those who accused him to come forward with facts and figures to back up their claims. One thing Nigerians can be sure of is that if facts emerge regarding this in future, the President Muhammadu Buhari led government would never sweep such matters under the carpet.

Recommendations have been pouring in from several economic experts in recent days, ranging from further growing Nigeria’s foreign reserves, addressing multiple rates in the forex market, building better synergy with economic ministries and agencies, petroleum subsidy issue and many more. I wish to advise the CBN boss to also focus on how to consolidate on his recent efforts by reducing the interest rate so that more Nigerians, especially manufacturers, can easily access loans and easily pay back.

While I commend the effort put into the Anchor Borrowers’ Program (ABP), it is not enough. Not only should the project be expanded, but the CBN, in line with its developmental function needs to look into other sectors like the textile industry where great potential is lying to waste. He must also provide some intervention to ensure that Nigeria increases its palm oil production capacity. Right now the price per barrel of palm oil is higher than that of crude oil.

Nigeria has a tropical environment that enables it to be one of the world’s largest producers of palm oil, and should never have been playing catch up with Asian countries in the first place. The more industrial growth we achieve in the next five years, the more jobs we create, the more transparency we have in our foreign exchange market, the better our chances of achieving economic liberation. Nigeria needs the support of Nigerians now, more than ever. And as I have explained earlier, at the end of the day, Nigerians must be the biggest winner.

Akanbi is a Senator of the Federal Republic of Nigeria