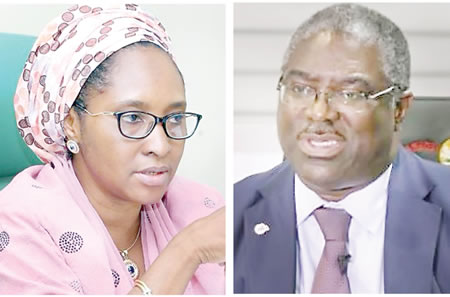 The clarification from the Federal Government, through the Minister of Finance, Budget and National Planning, Zainab Ahmed, last Friday, of the exact rate it intends to increase the Value Added Tax (VAT), no doubt, put paid to the hope and optimism expressed in some quarters that the Federal Government might reconsider its stand on the controversial issue and maintain the status quo.

Such optimism is not unfounded. In 2007, former President Olusegun Obasanjo, as a ‘parting gift’ to Nigerians, had announced an increase in VAT from 5 per cent to 10 per cent, a development that saw the organised labour being at daggers drawn with the then Yar Adua government.

It took an outright cancellation of the proposed increase, by the late president Yar Adua to assuage the feelings of apprehensive Nigerians, especially the labour unions, who had vowed to make the country ungovernable, if the then government refused to hearken to their ‘prayers.

Interestingly, analysts are of the opinion that the scenario might be different this time around. For instance, besides the clarification from the minister, of the exact figure of the proposed VAT, depicting the seriousness of the incumbent government to go the whole the hog, concerning the policy, not a few analysts are also of the belief that the proceeds expected from the increase are just too exciting for a government, desirous of shoring up its revenue base, to let go.

For instance, if not scuttled by the national assembly or the civil societies, a total revenue estimate of the sum of N7.5 trillion is expected in year 2020, while N2.09 trillion will be accruing to the federation account and VAT respectively.

“There will of course be the distribution to the three tiers of government, based on the statutorily revenue sharing formula as defined in the constitution and to this effect, it means the Federal Government will be receiving proposed aggregate of N4.26 trillion from the federal account and the VAT pool, while the states and the local governments are expected to receive N3.04 trillion and N2.27 trillion respectively,” the minister had said.

Mixed reactions have, however trailed the proposed increase, since it was announced few days ago. For instance, some analysts actually share in the Finance minister’s excitement and optimism that the proposed increase, expected to commence in 2020, would go a long way in enhancing the smooth running of government, especially at the state and local government levels, and put to end the perennial challenge of paying salaries, usually experienced by the states and local governments at month ends. But for many others, if implemented, it would further aggravate the nation’s already fragile economy, thereby putting its citizens to risk.

A finance analyst and Chief Executive Officer, Wealthgate Advisor, Mr Adebiyi Adesuyi, is of the opinion that the increase is still within acceptable range, considering the nation’s present economic realities, and what obtains around the globe.

According to the seasoned banker, Nigeria’s tax to its Gross Domestic Product, remains one of the lowest in the world, arguing that the nation’s revenue as a percentage of GDP is 6.1 per cent, while that of UK and France remain 34.4 per cent and 47.9 per cent, a development, he argues, is responsible for the nation’s heavy dependence on oil revenue.

The country does not fare better in terms of the VAT its citizen’s pay on some goods and services, either.

“You see, Nigeria has one of the lowest taxes to GDP ratios in the World. Nigeria’s revenue as a percentage of GDP is 6.1 per cent compared to UK’s 34.4 per cent, USA’s 27.1 per cent, France’s 47.9 per cent, South Africa’s 26.9 per cent and Ghana’s 20.8 per cent. This reflects our heavy dependence on Oil revenue for financing Government expenditure.

“From the foregoing, the upward review of Nigeria’s VAT to 7.5 per cent is still within an acceptable range,” he argued.

Adesuyi is however of the opinion that the three tiers of Government must be able to justify the raise by using the additional revenue to improve the education and health systems, within their spheres.

“In addition, the present scenario wherein our VAT administration robs Peter to pay Paul should be corrected. 70 per cent of the country’s VAT revenue comes from the South and this is shared with the North which contributes considerably low revenue to the national purse. There must be a more equitable way of sharing the revenue based on contribution instead of misconceived parameters,” he added.

Adesuyi also allays the fears in some quarters that the increase might further impoverish Nigerians, adding that if well applied, it would rather grow the nation’s economy, with a positive trickle-down effect on the citizens.

But former Chairman of the Chartered Institute of Bankers (CIBN) Lagos chapter, Mr Wale Adeyemi, refused to share such optimism. He would rather see the proposal as ill-timed; since the nation’s economy is yet to completely free itself from the shackles of recession.

“Besides, I believe it is wrong for us to do such relative comparison and come out with the verdict that since our VAT remains the lowest in the world, it should therefore be jerked up, because I don’t see the value the government is adding to the lives of the citizens that pay this tax, unlike in those advanced economies we are talking about.

“For instance, you have an effective transport system in most of these places, and the infrastructures are top class. The roads are good; electricity is not an issue there, while you have an option of an effective transport system in these countries you are talking about. Remember the tax is called value added tax, but the question is what value are we talking about here? It is a way of ripping off Nigerians by fiat,” Adeyemi argued.

The Director-General of the Lagos Chamber of Commerce and Industry (LCCI), Mr Muda Yusuf, also shares the same sentiments.  The LCCI boss sees the proposed increase as an additional burden on investors and businesses, already grappling with the challenge of multiple taxation.

Besides, he argues that the proposed increase might impact, adversely, profit margins investments growth, consumer purchasing power and competitiveness.

“The proposal to increase Value Added Tax (VAT) from 5 per cent to 7.2 per cent amounts to an additional burden on investors. Profit margins investments growth, consumer purchasing power and competitiveness of firms will be adversely impacted by this review.

He expressed regrets that VAT is not being treated as consumption tax, but imposed on the entire value chain of production and investment; the reason the proposed increase has been a source of worry for investors.

“Most often, VAT is imposed on the entire value chain of production and investment. Intermediate products are also often subjected to VAT. This is why investors would worry about the proposal to review the VAT.

“We acknowledge that government is currently facing severe revenue challenges which have been impeding its capacity to provide basic services and infrastructure to the citizens. But it is important to realise that there is a relationship between investment growth, private sector development, economic performance and revenue performance of government,” Yusuf stated.

He however called on the Federal Government to scale up its commitment to the creation of an enabling environment for investment in the country, which should be from the perspective of policy environment, regulatory environment and the macro economic environment.

The Director-General of the Manufacturers Association of Nigeria (MAN), Mr Segun Ajayi-Kadir, is also in sync with the above opinion.

Describing the proposal as ‘rather unexpected and ill-timed’, Ajayi expressed the belief that, if implemented, the hike would impose significant burden on the private sector and the average Nigerian.

“It is rather unexpected and ill-timed. Whilst it is ostensibly aimed at increasing the revenue portfolio of government, it will impose significant burden on the private sector and on the average Nigerian. The effect on market operations, especially the informal sector, will also be high,” he stated.

The MAN boss argued that instead of an increase, what the Federal Government should concern itself with, for now, should be on how to expand the tax base and lower the tax rates.

“I said it is unexpected because I assumed that we should be preoccupied with lowering the rate of taxes and expanding the tax base. It is ill-timed because VAT, a regressive tax, takes a larger percentage of income from low-income earners than from high-income earners. So when this is coming at a time that the earnings of an average Nigeria are dwindling, there is cause for concern,” he stated.

Ajayi argued that to be able to keep inflation rate from an alarming increase, government should be mindful of measures that may reverse the positive trend, recorded over the year.

He added that despite the Federal Government’s optimism of the increase, boosting the capacity of the states and local government to pay the minimum wage and so on, the increase might amount to ‘taking back with the other hand what the government had earlier given with the first hand.’

While calling on the government to reconsider the proposition, Ajayi also expressed the belief that the nation’s lawmakers would rise up to the occasion since their ninpit is needed to implement such policy.

“In any case, the National Assembly will have to concur and amend the VAT Act in order to give effect to the increase. I hope these processes would highlight the inherent downsides and suggest alternative measures that Government could employ to achieve increased revenue,” he stated.

He also urged the Federal Government to toe the path of governments in neighbouring countries, that have labelled such taxes as ‘nuisance taxes’, and are embarking on a downward review of such taxes to provide relief for ‘business and re-energise the private sector.’

“In summary, the increase in VAT would compound the incidence of high build-up of unsold inventory, abrade the purchasing power of the average Nigerian, erode the profitability of the manufacturing sector and exacerbate its sub-optimal performance,” he added.