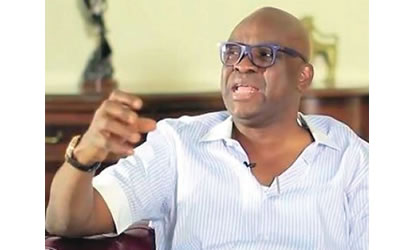 Ekiti State Governor, Dr Ayodele Fayose has accused the Federal Government and its law enforcement agencies of contributing to the problem of prison congestion in the country.
Fayose was responding to a letter written by the National Security Adviser, Major General B.M Mungonu (rtd) with reference number NSA/601/A and dated January 16, 2017 to the State Governors on the need to facilitate quick decongestion of the nation’s prisons.
In the said letter, “the NSA described the congestion of prisons by awaiting trial suspects and condemned convicts as a major problem bedeviling the ‎administration of Justice in Nigeria”.
However, in his reply to the letter, Fayose noted that “some Federal Government agencies such as the Nigeria Police Force (NPF), Department of the State Services (DSS), and the Economic Financial Crimes Commission (EFCC) arrest and detain innocent citizens and perceived opponents of the Federal Government for flimsy reasons and on malicious, spurious and unfounded allegations”.
According to the letter personally signed by Fayose and copied President Muhammadu Buhari and the Attorney General of the Federation, a copy of which was made available to newsmen in Abuja yesterday, the governor stated that “many Nigerians are currently languishing in prison without any reprieve because of the trumped-up charges of heinous offenses preferred against them by these Agencies”.
“Specifically, the controversial arrests and continued detention of Messers Nnamdi Kanu, Col. Sambo Dasuki (Rtd) and Ibrahim El Zakyzaky among several others, and the flagrant disregard and disobedience to court orders directing their release from prison by security and law enforcement agencies are not only unjust, immoral and detestable but constitute an affront to the rule of law and a rape on democracy”, he stated.
Fayose however called on the office of the NSA “to critically appraise the nefarious activities of the security and law enforcement agencies which not only constitute an infraction of the fundamental rights of the affected citizens, guaranteed under the constitution, but also directly contribute to the perennial prisons congestion”.
According to him, “Your inaction or failure to address the above-mentioned acts of Executive rascality and lawlessness will definitely undermine and belie your sincere concern and genuine commitment to the decongestion of the prisons as stated in your letter
“It is therefore my candid advice that your office should urgently intimate appropriate authorities with the need to henceforth lead by example, by respecting the rule of law, eschewing all forms of arbitrary discriminatory and dictatorial practices and disobedience to court orders
“It is my believe that your prompt action in the above regard, may help to correct the growing public perception that the Federal Government is selective in its observance of the rule of law and is partial in its so called Anti-Corruption Crusade”.