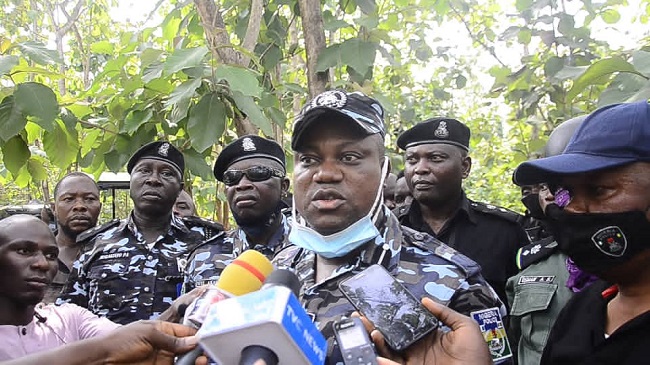 Operatives in Oyo State Police Command on Wednesday again stormed the forest at Onipe Community, on Ibadan-Ijebu Ode Road, in search of the victims abducted by gunmen on Monday.

They were also with journalists to hunt for the kidnappers.

The combing of the bush which started at about 9 am and was paused at about 4:30 pm saw the operatives in the deep bush at Onigambari, to link other places where the abductors were tracked to.

In the course of the search, two herdsmen noticed afar quickly made a strange sound to the cows they were staying with, putting the animals in a race, and the herdsmen disappearing with them.

Also, on a return journey, a Fulani man was noticed swiftly disappearing into the bush as soon as he noticed police operatives.

Though he was pursued, his deft moves in the thick bush made his arrest difficult, with the police cautious of any shooting.

Speaking with journalists while other operatives remained in the bush, the Assistant Commissioner of Police, Operations opened up on the recent cases of abduction in the axis.

ACP Ojo stated that in the course of investigation, it was discovered that the abducted victims were usually whisked into nearby bushes.

He said: “As part of security measures put in place by the command, we have deployed several patrol vehicles along the road, to check the activities of these hoodlums.

“We have also mobilised so many patrol teams – the tactical teams of the command, members of the vigilante group and local hunters – to comb the bush.”

Saying that journalists who were part of the day’s operations could see how wide and extended the bush that was searched was, to the point that the operatives got to the border between Oyo and Ogun states, Ojo assured that the command was undeterred by not having any of the hoodlums arrested yet.

He stated further that the command would continue to chase them until they would be out of the state.

According to ACP Ojo, “we have decided not to wait for them on the road. That is our plan. We will take the battle to them in the bush.

“We have started, and will continue, to ensure that the victims are rescued.

“Our plan, our aim, is to get these people arrested. We also intend to chase them out completely.”

Bitcoin Impact on the Global Economy