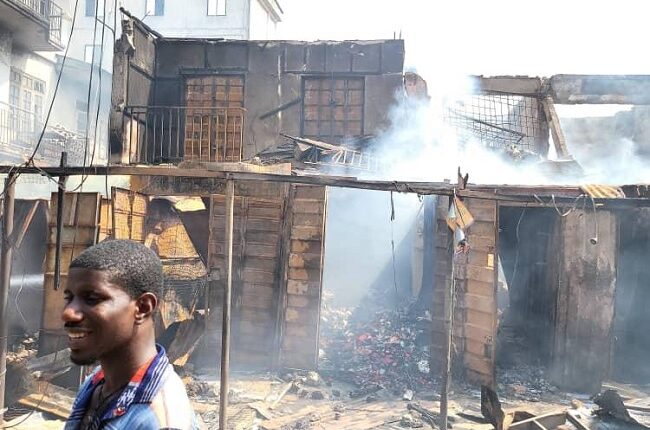 The Anambra State Police Command has confirmed the fire outbreak that occured at Kano Street part of Onitsha Main Market, Onitsha, the commercial city of the state, on Monday morning.

The State PPRO, DSP Toochukwu Ikenga, who confirmed the incident in a statement in Awka, disclosed that goods and properties worth millions of naira have been destroyed.

He said the outbreak which happened at about 1 am, has been put under control.

Preliminary information according to DSP Ikenga shows that the cause of the fire was a result electrical upsurge from a cosmetics store in the storey building.

He advised members of the public to always turn off their appliances before leaving the house and offices.

Meanwhile, the State Governor, Chukwuma Soludo, has commiserated with victims and owners of some shops affected at the market.

The Governor, in a statement made available to Journalists in Awka, by his Press Secretary, Christian Aburime, expressed sadness over the incident that left shops and goods razed and the losses incurred

“I commiserate with the shop owners over the inferno.

“As a responsive government, we are already on top of the situation, investigating the remote and immediate causes of the fire, as well as the losses incurred with a view to averting a future recurrence of the disaster.

“Efforts of our emergency responders like the state fire service contributed to extinguishing the fire and I find their efforts heartwarming.

“I encourage those affected to remain strong and resolute in the face of the extreme loss as we continue to work with relevant institutions to find lasting solutions to the perennial fire incidences across the state.”

Soludo has directed the State Deputy Governor, Dr Onyekachukwu Ibezim in the company of the Commissioner for Power and Water Resources, Engr Julius Chukwuemeka and the Commissioner for Special Duties, Barr Sly Ezeokenwa to convey government commiseration to the affected victims and leadership of the market.

The governor used this opportunity to reiterate the need for citizens to adhere to fire safety measures, particularly in this season of the year.