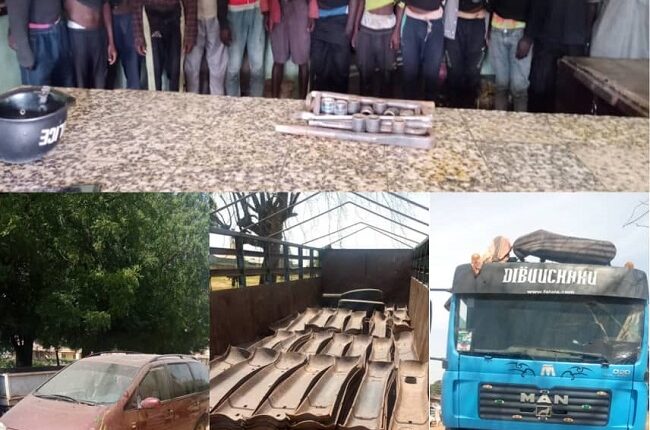 Thirty suspected vandals of railway tracks in different parts of Nigeria have been arrested by the operatives of the Railway Command of the Nigeria Police Force.

The command, while speaking on the arrest of the suspects, described it as the result of the directive from President Muhammadu Buhari to security operatives in Nigeria to safeguard the railways in all parts of the country.

The railway command in a statement, made available to the Tribune Online on Monday said “Following the directives of President Muhammadu Buhari, GCFR to all service chiefs to safeguard the railway infrastructure across the Federation, the Inspector-General of Police of the Nigerian Police Force, IGP Usman Baba Alkali, has directed the Railway Police Command led by CP Yetunde Longe to engage the Direct Action Response Tactics (DART), to effectively to protect the railway corridors from vandals.”

it also stated that ” Upon this directive, the Railway Police command of the Nigerian Police Force has arrested Thirty (30) suspected railway vandals between the month of September and October 2022. ”

“The command recorded it big on the 8th of September, 2022. Acting upon credible information, men of the Railway Police Command swooped on some criminal elements that have been involved in recurrent vandalisation and theft of railway iron sleepers at the section KM 1086 Sheme Town Faskari Local Government Area of Kastina state; leading to the arrest of 14 suspects.”

The command added that ” It was gathered that the suspects after an exchange of fire with the policemen abandoned a Trailer truck with REG NO NASARAWA LFA 307XB and a Sharon car. However, further relentless combing of the crime scene led to the arrest of the suspects on 10th of September, 2022.”

“Similarly, on 26th of September 2022, the Rigasa Railway Divisional Police Headquarters arrested five suspects in connection with the vandalisation of window frames at the Gidan Buse substation station. The suspects namely: Sadi Mohammed (26), Nasiru Yakubu (35), and Yau Ibrahim (26); while two others were arrested- Buhari Samlia (25), and Aliyu Abdulahi (24) were also arrested for the same crime on 17th of October, 2022.”

“On the 4th and 14th of November, 2022, Men of the Kafanchan Railway Police Division and Men of the Nigerian Army School of artillery intercepted two Dangote trucks with Registration numbers: MJB-367XA & DAL-754ZX. The trucks were loaded with 45 and 37 long rail irons respectively.”

The police Railway Command also stated that Three suspects each: Adamu Lawal (32), Tajudeen Yusuf (27), Sulieman Lawal (19); Abdulkadir Idris (45), Garba Sule (37), and Bilyaminu I Ahmadu (37), have been arrested in connection to the crime.”

In another operation ” Bauchi Divisional Headquarters upon a credible tip-off also intercepted a J5 bus with registration number XC318BAU. The suspects upon sighting the policemen fled, abandoning the bus loaded with fifty pieces of Railway sleepers concealed with firewood. The bus and exhibits have been taken into police custody while investigations to apprehend the suspects continue.”

The Commissioner of Police for the Railway Police Command, CP Yetunde Longe, however, noted that investigations would be swiftly concluded and the culprits will be duly charged to court to face the wrath of the law to its full extent.