The entire Edo State on Sunday afternoon erupted in jubilation as the Independent National Electoral Commission (INEC) declared Governor Godwin Obaseki of the Peoples Democratic Party (PDP) as the winner of the governorship election held on Saturday.

Obaseki, defeated his closest rival, Pastor Osagie Ize-Iyamu of the All Progressive Congress (APC), by a margin of 84,336 votes having polled a total of 307,995 votes as against Ize-Iyamu’s 223,619 votes. While Obaseki won the majority of votes in 13 Local Government Areas, Ize-Iyamu garnered majority of votes in five LGAs.

The pattern of the results showed that while Obaseki won in all the seven councils in the Edo South Senatorial District, the APC candidate could only manage to win minimally in five councils in Edo North, where the former National Chairman of the party, Comrade Adams Oshiomole and the PDP running mate and deputy governor, Comrade Philip Shaibu hail from. PDP however, won one council area, Owan West in the zone.

Edo Central delivered a hundred percent vote to the PDP as the party won all the five local councils in the zone.

Tribune Online reports that the Sunday victory will make it the second time in four years that Obaseki will be defeating Ize-Iyamu in the governorship race. The first time was in 2016 when Obaseki ran under the platform of the APC while Ize-Iyamu was the PDP flagbearer.

With the reversal of candidacies in the 2020 poll, again, Obaseki trounced Ize-Iyamu, and this time around, defeating him in his Orhiomwon council area.

Speaking after receiving the results of the poll, the National Chairman of PDP Edo Governorship Campaign Council, Governor Nyesom Wike of Rivers State, thanked the people of the state for standing by the party. 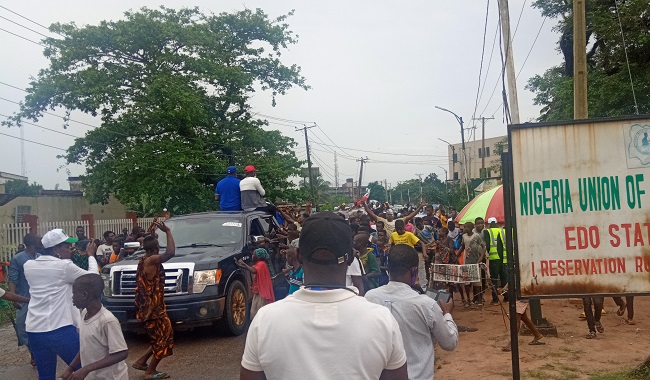 “Edo people have spoken that we don’t tie our fate to one man. The results of the election show that all your efforts are not in vain. I want to thank my fellow brother governors of Oyo, Delta and Enugu States for their presence here and others who are not here for their support,” Wike enthused.

Speaking after the announcement, Governor Obaseki thanked the people of the state for their faith in his ability to deliver and make Edo great again.

“The great people of Edo State have spoken. I want to thank Governor Wike of Rivers State, Governor Seyi Makinde of Oyo State, Governor Ifeanyi Ugwuanyi of Enugu State and my brother, Governor Okowa of Delta State for standing by me. I want to thank my party, the PDP, not only for giving me the umbrella when I needed it most but also for the hard work which has brought me back to the office,” he said.

The elated governor also thanked “President Buhari for entrenching democracy by allowing INEC and the security agencies to perform their duties and to show that they are capable to conduct a free and fair election.

“The collective will of Edo people made us to triumph over godfather. I want to reiterate that working with my deputy, Comrade Philip Shaibu, we are committed to making Edo great again,” he promised.