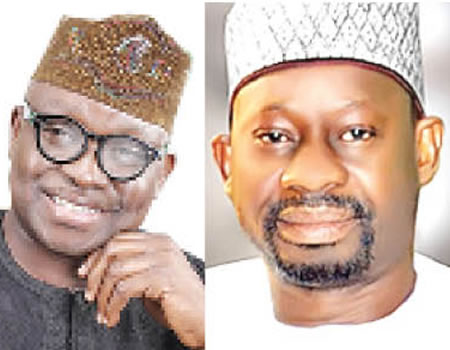 On Sunday, March 4, 2018, governors elected under the banner of the leading opposition party, the Peoples Democratic Party (PDP),  as well as members of the National Working Committee and other notable bigwigs in the party were hosted in Gombe by the Gombe State Governor, Ibrahim Hassan Dankwambo, with the aim of brainstorming on how the party will approach the 2019 general elections and take over power.

Among the first to arrive Gombe for the all important meeting was the Chairman of the PDP Governor’s Forum, Governor of Ekiti State, Ayo Fayose, who was later seen alone in a car, with the host, Governor  Dankwambo, at the wheels, going round all the lodges housing the governors. This gave the indication that something behind the scene was about to happen most particularly as it affects the 2019 general elections.

Other governors who were in Gombe for the meeting included Ben Ayade of Cross River, Emmanuel Udom of Akwa-Ibom State, Ifeanyi Okowa of Delta, Darius Ishaku of Taraba, Victor Okeze Ikpaezu of Abia while the Governor of Rivers State, Nyesom Wike was conspicuously absent, as well as the National Chairman of the party, Uche Secondus.

Also in attendance at the meeting were all State PDP Chairmen and their Secretaries across the country, as well as notable members of the party’s Board of Trustee (BoT),  just as many others who have a say in the running of the party were seen in what actually pointed to the fact that the party was preparing grounds for the 2019 general elections.

Though journalists were not given any reason or the agenda for the meeting or why it was held in Gombe, speculations were rife that Governor Dankwambo, who has indicated his interest in the presidency, having served the constitutional two terms as governor hosted the meeting in order to woo of his fellow governors in his bid for the party’s presidential ticket in the 2019 general elections.

Though, the National Chairman of the party, Chief Uche Secondus, was expected at the meeting, he was not there as he was said to have travelled out of the country with the Rivers State Governor,  Nyesom Wike,  just as some other party bigwigs who were not comfortable with the development tactically absented themselves.

While speaking to journalists, Governor Dankwambo’s Senior Special Assistant on Media and Publicity, Mallam Junaidu Usman Abubakar Gombe said that the communiqué of the meeting would the purpose of the meeting. But after several hours of the meeting, in the early hours of Monday, the meeting ended but without the Cross River State Governor who left earlier and to the astonishment of the anxiously waiting journalists, the communique issued was so brief and completely out of the insinuated reason.

All the party did, according to the communique, which was read by the Chairman of the Governors Forum,  Ayodele Peter Fayose, was to berate the President Muhammadu Buhari-led APC Federal Government on its fight against corruption, declaring that the fight is nothing but a war against the opposition party in the country particularly  ahead of the 2019 general elections.

The PDP declared that it is not against a holistic fight against corruption but observed that what is being done now is picking on perceived opposition members in order to weaken it so that APC can have a smooth ride back to power in 2019, though it has failed Nigerians in the past three years of its coming to power.

The Chairman of the PDP Governors Forum, Ayodele Fayose further stated that the meeting considered the present Transparency International report on the fight against corruption by the APC-led administration which he said had vindicated the PDP against all the accusations of corruption leveled against it by the APC administration. He pointed out that the report, which is damaging to the present administration, has now made PDP the only viable political party in the country.

While speaking on the abduction of the Dapchi school girls by the dreaded Islamic sect, Boko Haram, the PDP indicted the APC-led Federal Government of laxity in the fight against insurgents in the North-East region of the country and called on the Federal Government to do everything humanly possible to get the girls back to their parents.

The party lamented that, “several billions of dollars have been said to have been spent to defeat the insurgents but yet, people are being killed on a daily basis while many people are being abducted at will. The Federal Government has to wake up to its responsibility of protecting lives and properties of innocent citizens of the country.”

It further declared that the APC-led Federal Government has failed Nigerians in every ramification because it has not been able to fulfill any of the campaign promises made to the people during the 2015 electioneering.

The PDP then concluded that it is the only credible political party in the country and is ready to reclaim power come 2019 because according to it, “Nigerians have now seen that all the APC stands for is failed promises and political gimmicks to cling onto power.”

While fielding questions from journalists, Fayose declared that the PDP is not in any way bothered by the recent defection of some of its notable members to another party saying that the move will not in any way diminish the popularity of the party.

He added that all those who left the party are inconsequential to the well being of the PDP and that the party will only be worried if those he described as its real members party decide to leave saying: “As long as the real grassroots politicians remain with us, we are not worried.

“I don’t want to mention names here but if you are referring to those Abuja politicians defecting from the party, it is good for us. We cannot remain with those who are not adding any value to the popularity of the party, it’s better they leave.”

When reminded that the ruling APC has been traversing the country and holding rallies to garner more support ahead of time, he said, “we too have been going round to talk to our people. Let me however remind you that in 2015 the PDP did the same thing and lost the elections, what the APC is doing now is preparing to lose power in 2019.”

He further said that the party is better organised now than ever before and is ready to reclaim power come 2019 because, according to him, Nigerians have realised that PDP is the better change now.

Fayose concluded that the party cannot force people to remain in it because it is a democracy and people are free to choose what party is good for them.

In the same vein, the Deputy National Chairman of the party in charge of the Northern zone, Senator Babayo Garba Gamawa, dismissed insinuations that the exit of some people from the party will deflate it and jeopardise its chances in the 2019 general elections.

Gamawa opined that the party is bigger than any individual and so it will not go begging anyone to remain in it, pointing out that, “just as some people are going out of the PDP, many are trooping into it, therefore making the exits to be insignificant and inconsequential.”

It would be recalled that a group of former members of the party, led by the defeated National Chairmanship candidate, Professor Tunde Adeniran, announced their defection from the party recently.

Though, the outcome of the meeting did not publicly declare exhaustively the issues discussed behind closed-doors until the wee hours of Monday, feelers have it that topmost on the agenda of the meeting was how to raise a formidable presidential candidate,  who will not only give the incumbent President Muhammadu Buhari and the APC a good fight, but also wrestle power back to the PDP so that it will be able to fulfill its determination to be in power in the country for 60 years.

On President Buhari’s visit to Benue

Only justice can guarantee peace —Shuaib