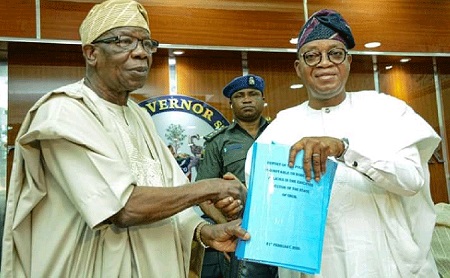 Osun State education review committee, on Monday, submitted its report to Governor Gboyega Oyetola, recommending the reversal of the single uniform in public schools and return to the 6-3-3-4 educational system.

It is recalled that the immediate past governor of Osun and incumbent Minister for Internal Affairs, Mr Rauf Aregbesola had during his administration introduced a single uniform for students in the state’s public schools.

Presenting the report of the education policy review roundtable summit, the chairman of the committee, Professor Olu Aina said: “the panel had painstakingly reviewed and addressed all education-related issues, with a view to strengthening the delivery of quality and affordable education in response to wishes and yearnings of the people in the state.”

He disclosed that the panel proposed 11 recommendations within the context of the national educational policy and global best practices, saying, for instance, the merging of primary five and six, though laudable for reason of school feeding initiative, violated the 6-3-3-4 structure.

Aina further explained that “the creation of “the 4-5-3-4 and the Middle School are unknown to the National Policy on Education (NPE). Even though education is on the concurrent legislative list of the constitution of Nigeria, state policy should be closely aligned to, and flow from the national policy so that product of our education policy and practice are not disadvantaged.”

He stated, “while recommending the retaining of Opon Imo, with some medications, other issues X-rayed by the panel are: policy of mixing male and female pupils in schools established for single-sex students and desirability of retaining the posts of Head Masters General and Tutors General in the rank of Permanent Secretary among others.”

Receiving the report, Osun State governor, Mr Gboyega Oyetola said that the need to review the education policy was informed by the peoples’ demand, saying the government would ensure full implementation of whatever that will improve the lots of the people and protect the future of its children.

According to him, “It was our desire to hearken to the yearnings and aspirations of the citizenry that necessitated this review in the first instance.

“As a government, our policies and programmes are driven by citizens’ needs. These needs which were further validated by the United Kingdom Department for International Development’s (DFID)- funded Citizens Needs Assessment exercise in Osun, were harvested during the Thank You Tour/Town Hall Meetings, where the people told us in plain language that they wanted some aspects of our educational policies removed, adjusted or improved upon.

“That was what led to the Policy Review Roundtable Summit, the report of which we are receiving today. We are prepared to do what will improve the lots of our people and protect the future of our children. As a leader, therefore, I am conscious of the need to be just and fair to all manner of people regardless of their leanings in the discharge of my duties. This I will always uphold”, Oyetola remarked.

Woman, three others jailed 160 years over possession of fake banknotes