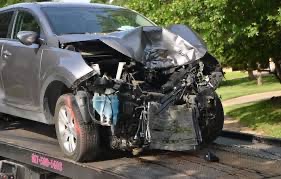 The accident which occurred in the afternoon of the day, also left three children and two other male adults severely injured.

Eyewitness account told our reporter that, those that sustained various degrees of injuries in the accident had been taken to an hospital for medical attention while the remains of the deceased had been deposited at the same hospital where the injured victims were being attended to.

The eyewitness who identified himself as Muftau Rasaki hinted further that, the prompt intervention of operatives from the Federal Road Safety Corps, Osun State Sector command, Men of the Nigerian Police Force and the Osun Ambulance Services saved the scene of the accident from being traffic blocked.

Speaking on the development,the state FRSC Sector Commander, Mrs Kudirat Ibrahim, confirmed the accident and explained that, it was the over speeding of the drivers of both vehicles that made the accident to be fatal.

She however hinted that, the crash could have been averted, if the drivers of the vehicles were not over speeding.

Mrs Ibrahim thereafter disclosed that, the woman who lost her life was confirmed dead by a medical doctor at the OAU Teaching Hospital Complex, Ile-ife when their rescue team got to the hospital.

The sector commander who spoke through the Corps Public Relations Officer in the state, Mrs Agnes Ogungbemi,also pointed out that,”the three children sustained minor injuries at the scene of the accident before being attended to by the Osun Ambulance team and taken to the hospital.

She, however, listed items found in both vehicles to include, a black bag containing some personal effects, a brown suitcase, food items and a black purse containing a driver’s licence, First Bank ATM card and a sum of N18,610 which she said,had been  handed over to policemen in Ikire Divisional Police Office.