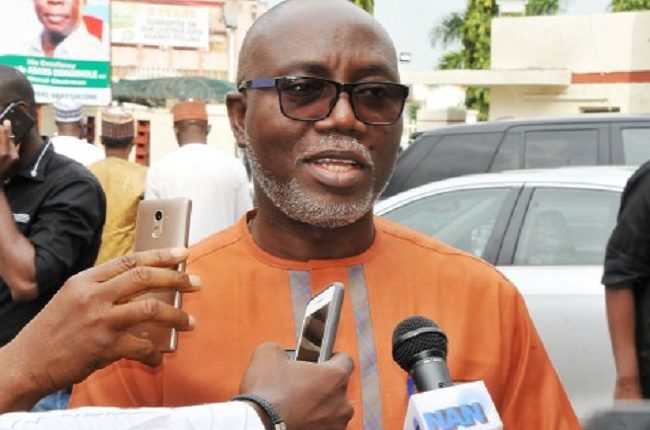 The Ondo State governor and the candidate of the All Progressives Congress (APC) in the forthcoming governorship election in the state, Mr Rotimi Akeredolu, has named Mr Lucky Ayedatiwa as his running mate.

Ayedatiwa who was a former representative of the state on the Board of Niger Delta Development Commission (NDDC), hails from the Ilaje local government area of the state.

A source within the ruling APC in the state, who confirmed the choice of Ayedatiwa by Akeredolu said the former NDDC representative is not likely to be substituted by the party before the August 18, 2020 deadline by INEC.

The embattled deputy governor of the state, Hon Agboola Ajayi, who defected to the Peoples Democratic Party (PDP) will be replaced by Ayedatiwa.

Ajayi contested in the PDP governorship primary but lost to Eyitayo Jegede.

The source within APC said “the choice of Ayedatiwa was concluded at a meeting of the highest decision-making body of Ondo APC, where it was resolved on the choice of Lucky Ayedatiwa as the deputy governorship candidate of the party,”

“The party took this far-reaching decision after considering all factors that would lead to its victory at the poll.

Meanwhile, the APC in the state said Akeredolu has not picked a running mate, saying the party will come out with an official statement on the development.

The spokesman of the party in the state, Alex Kalejaiye, said the party was still looking for a suitable running mate for the October 10 governorship election who must be a loyal party man that would not betray the party in the future.

Also, the Ondo State Commissioner for Information and Orientation, Donald Ojogo, said he was not aware that any running mate has been picked bit urged the member of the public to wait for the official statement from the party.

The coast appears finally clear for African Development Bank President, Dr Akinwumi Adesina to be inaugurated for a second term in the office as the independent review panel cleared him of all allegations against him by the United States of America… Read Full Story

Ondo 2020: Monarch threatens to deal with perpetrators of political violence in Owo