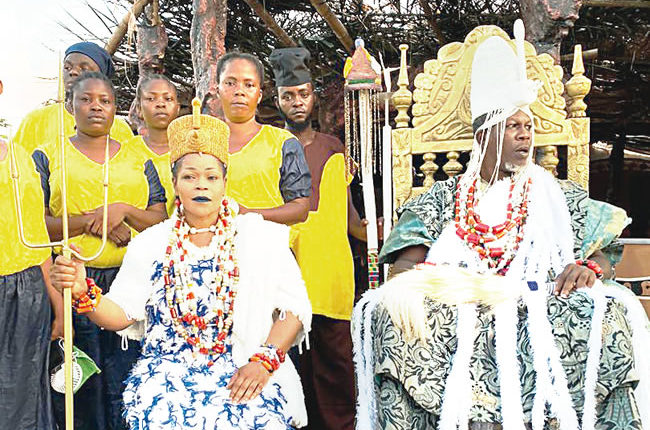 As the movie industry continues to experience growth in leaps and bounds so also are new investors showing interest in the movie-making venture, one that is capable of changing the storytelling narrative and movie production.

With movie distribution and marketing also attracting foreign investors and online marketing firms, it is not surprising to see movie practitioners stepping up their game and raising the quality of movie production and scripting.

This new trend appears to have birthed the new movie, Olokun, which was bankrolled by three companies – October 1st 1950 Productions, Effectz Planet and 27th Street Entertainment – with the bid to changing the face of movie production in Nigeria, thereby producing movie with modern production equipment and creating an atmosphere where stories are better told and documented.

From the location of the movie to its cast and crew, it’s obvious from the script and planning that Olokun would change the norm and set a new standard for many moviemakers.

The sponsors picked Iga Fulani settlement, located some kilometers after Ido Local Government Area of Oyo State with actors and actresses staying in the Fulani settlement for three weeks to bring to life a new dream.

While some of them were said to have raised fears over the choice of location giving the spate of killings, kidnappings and other crimes pervading the atmosphere, they were however surprised at the warm welcome they received from the Fulani in Iga community where they were hosted for three weeks with unhindered access.

Popular actors on the set of the movie when R visited the scene were Ojopagogo, Shaffy Bello, Femi Adebayo, Jide Awobona, Razak Olayiwola (Ojopagogo) and Peju Ogunmola. Yinka Salau being put through their scripts and roles by award-winning directors, Dimeji Ajibola and Bayo Tijani.

The production consultant of the movie, Emiralty Africa, described the job as one that would give movie-making in Nigeria a new name.

Speaking to R about the new project, the executive producer of the movie, Adebola Balogun, who was an animator and editor for some years before venturing into movie production, said as a movie lover for many years, seeing the level of movie production in Nigeria not measuring up became a source of worry for him.

“I decided to make this movie to change the mindset about what people feel Yoruba movies can be like. In this part of the world, the moment people hear about Yoruba movies, they already have a premeditated response; some could even tell the end of the movie from the beginning. So we thought about giving the people something unique.

“We want to appeal to the rest of the world and change the narrative of movie-making when it comes to location, language, the set, the people, costume and production, directing, writing of the script and other important elements. Olokun, for me, is a movie that will change the game for us and set a new standard,” he said.

Also speaking about the story, the scriptwriter, Yewande Famakin, said she was led by the Holy Spirit to write the script, saying being an Africa Magic Viewers Choice Award (AMVCA) winner added pressure on her to deliver the script according to the legend surrounding Olokun.

“I have always wanted to write or produce a movie that has to do with water. I thought of Olokun in July when I went for shoot for my birthday at the beach. I felt that in the history of Yoruba, we heard that it was someone that turned into the river. So I went on a research to Ile-Ife to know more about the story. This movie is mixture of friction and non-friction,” she added.