Number plates: The facts, the myths and what you need to know 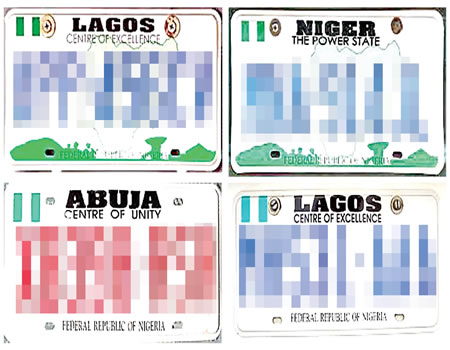 Number plates are issued by an independent federal agency, Federal Road Safety Corps (FRSC) in Nigeria. In this piece, Nigerians speak on what could happen if state governments take over such duty. OLAMIDE ENIOLA writes.

NOT many Nigerians understand the dynamics that go into vehicle number plate and its issuance. Beyond the fact that vehicle owners prefer to obtain the number plates of some states and are prepared to pay fortune for such, many Nigerians hardly know the operational guidelines for obtaining and using number plates in the country.

What Nigerians know about number plate

During the recently concluded general election, a video, whose authenticity has yet to be established, of a governorship candidate making a pronouncement on vehicle number plates caused quite a stir as it went viral. In the video, the candidate had kicked against the idea of people using other states’ number plates on their vehicles and vowing to impose tax on such people. The video drew so much reactions and it also exposed the understanding or lack of it of people about number plates for vehicles.

When Sunday Tribune asked some Nigerians what they know about number plates, virtually all of them correctly responded that they could be obtained in designated places across the country and used anywhere in Nigeria without intimidation or discrimination from anyone or agencies of government.

Mr. Sunday Adesina, an indigene of Ogbomoso North Local Government Area, who resides in Abuja, explained that the question of where to obtain number plate was a matter of choice and availability.

“For me, I am indifferent to where number plate is obtained and used, just as the constitution does not contain such restriction,” he said.

Corroborating that fact further, a young man who works with a publishing firm in Ibadan, Akintunde Ishola, claimed that the Nigerian constitution allows her citizens to obtain and use number plates from and in any part of the country.

He said: “Number plate is a kind of tracking number for car owners which signals their nationality as Nigerians and the state which issued the plate. There is no rule in the Nigerian constitution which regulates that a vehicle owner must obtain the number plate from their state of origin or their state of residence. You can claim any state’s number plate in Nigeria and use it anywhere in the country.”

During a visit to the Molete taxi park in Ibadan, a commercial taxi driver, who uses Ogun State number plate, Mr. Olalekan David, expressed his conviction that no law could be promulgated in the present day Nigeria to restrain Nigerians on where vehicle number plates should be obtained. If it happened, Mr. ‘Lekan revealed that it would be detrimental to his business.

The transporter stated further: “That isn’t good for my business too as a commercial taxi driver. Should that be, it means that if I get a charter offer to convey people from Ibadan to Ikire (in Osun State), I cannot go.

“How much would I realise from commuting between Molete and Mokola Roundabout that could be compared with taking the Ikire charter offer?” he asked.

Another car owner, who uses Lagos State number plate, recalled that what has always been important in Nigeria is having a valid vehicle number plate, no matter where the vehicle owner hails from or where they reside.

Choosing to remain anonymous, he said: “I hailed from Osun State, I’ve always lived in Oyo State, here in Ibadan, and I’ve always used Lagos State number plate. Where you obtain your number plate does not matter. If my memory serves me right, I obtained my first plate number in 1989. And even then, what mattered most was that you had a valid number plate.”

The attractions of and myths about number plates

Although it is a given fact that Nigerians can obtain any state’s number plate for their vehicles, yet vehicle owners still prefer number plates from certain states of the federation to others. Individuals who spoke to Sunday Tribune on this agreed that Lagos and Abuja number plates are usually in high demand than others.

Although Mr. Akintunde observed that some state governments might want to persuade her citizens and residents to obtain her number plates to increase internally generated revenue (IGR), he explained that, most times, “residents would prefer Lagos’ and Abuja’s number plates because they were and are capital cities respectively.

“More so, several people commute those two major Nigerian cities, and would not like to have any problem with the transportation regulatory bodies there,” he said.

Mr Adesina observed that vehicle owners would avoid other states’ number plates because they do not confer esteem like Lagos’ and Abuja’s.

His words: “I think people go for Lagos’ and Abuja’s number plates due to the seeming prestige attached to the old and new FCTs. This is Nigeria where location is status-credit. Although I am less concerned about the state’s name my number plate bears, the health of my car and the currency of my particulars take priority.”

Likewise lending his view, the car owner, who chose to remain anonymous, observed that: “As a common sight in Ibadan, people use Lagos and Abuja number plates, not because they are cheaper, but because they accord their users prestige.”

Substantiating the discussion, the man added further that commercial drivers in Ibadan use Osun State’s number plate more than Oyo’s because the former is considerate of vehicle owners’ plight.

“I think commercial drivers obtain number plates from other states, especially Osun, because Osun, unlike Oyo, does not compel drivers to do auto-reg. A good number of these commercial drivers, and even private drivers, have their cars parked with the engineer for several months, if not years, due to one mechanical fault or the other. When those cars with Osun State number plates get back on the road, the state does not ask their owners to pay for the years for which such cars were absent on the road; this is not so in Oyo State,” the man revealed.

For many other people, Lagos and Abuja number plates have special attraction because their owners, it is said, do not suffer the same harassment others endure at the hands of security personnel, especially police officers.

According to Bimpe Adegbite, a native of Ibadan, he chose his number plate simply to protect himself from any form of harassment on the road, particularly whenever he is travelling far distances.

“With a ‘neutral’ number plates like Lagos and Abuja, it is difficult to determine the actual identity of the vehicle owner,” he explained.

But Sarafadeen Adegoke, a commercial transporter, would have none of that. He told Sunday Tribune that he could not understand why some vehicle owners often opt for Lagos number plates, especially when there are cheaper alternatives. As a result of the desperation of such persons, he explained that some of them sometimes end up being issued fake number plates and exploited by the same police officers they are trying to protect themselves from.

The FRSC is the agency saddled with the responsibilities of producing and issuing number plates in Nigeria, and their spokesperson, Bisi Kazeem, has this to say on the issue: “Just like the national drivers licence, the operational procedures for the issuance of number plates (NPs) involves the FRSC whose role is the production and issuance of number plate to various state government who are represented by the state Board of Internal Revenue (BIR) and Motor Vehicle Administration Agency (MVAA). FRSC is also charged with the duty of managing the data base of registered vehicles in Nigeria.

“On the other hand, the BIR/MVAA represent the various states in the processes and are responsible for generating revenue from the scheme. They achieve this by selling vehicle NPs at government approved rates and registration of vehicles across the country. Their other functions include: issuance and registration of new NPs, processing transfer of vehicle ownership and updating the records of vehicle owners and processing transfer of registered vehicles details to FRSC National Vehicle Information Scheme (NVIS) database. And the VIO carries out testing of drivers and vehicle inspection and also ensure that only vehicles that meet minimum standards are registered to ply Nigerian roads.

Kazeem explained that though the FRSC is regulated by law to oversee the operations of number plates, the states are in fact the real forces behind the exercise. According to him, FRSC is merely the supervisor of the national exercise and that no state has the power to prevent any vehicle from plying its roads.

“However, it is not possible for state government to regulate or prevent a vehicle with another state’s number plate from using its road, because all vehicles are licensed to operate anywhere in the country irrespective of the state of registration. There is no regulation that restricts vehicles from plying state roads other than the state where such vehicles were registered,” he said.

Ambode: The shape of hope to come