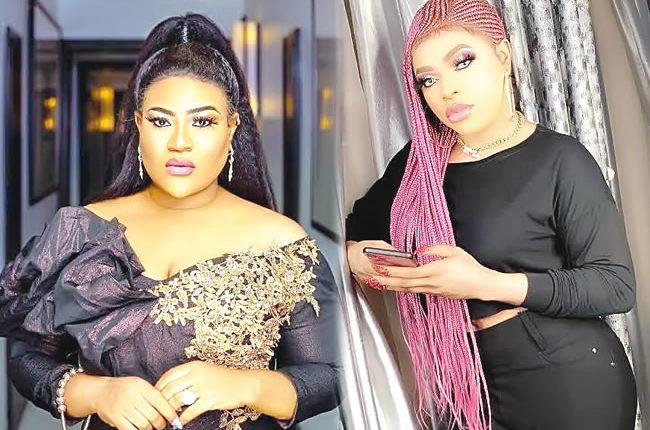 Over the week, former Big Brother Naija housemate, Ka3na was under serious criticism from Nigerians and celebrities for condemning a fan who tattooed the reality star’s name on her body.

Popular Nollwood actress, Nkechi Blessing Sunday who took side with Ka3na on the issue also had an issue with popular cross-dresser, Okuneye Idris, also known as Bobrisky.

Nkechi had made a comment about Bobrisky’s stand on the tattoo issue and had described him as being “insane”. This didn’t go down well with Bobrisky as he also took to Instagram with a long and nasty post calling-out and warning the actress never to mention his name on her page again, as he loved his space and peace.

He wrote: “Nkechi or whatever your name is called, I like my space and peace a lot, that is why I don’t follow people here, but when you cross your lane you are definitely waking a dangerous python up. I know you and clout are 5 and 6 and we are both shameless, so let us roll the dice.

“Never in your life mention my name on your stupid page again. I repeat, if you no won make Sango and Ogun strike your whole generation, if you have any issues with me be brave and face me, let us roll the dice. Na me say make you dey do audio giveaway for your page? Or na me swear for you not to have money to appreciate your so called fans for writing your name? If that person that wrote your name (on her body) knows how broke you are, she won’t even dare lol.

“Abeg, I am not part of the people you share your pu**y palliative to o. So, it is easy to drag you like I pass my neighbor generator. I will be expecting your reply on this so I can now fire all your bad records. Guys go and get your popcorns and drink ready. It’s about to be lit!”

After this post, Nkechi Blessing also took to her Instagram story to say she was advised by her fans to reply Bobrisky but she was just waking up in America where she was and it was too early for her to engage him. She wrote: “Turned off mentions from idiots. So, if you like mention me from now till next year OYO. Enjoy your drama in peace and leave me out of it. See comments saying I should reply someone with a leaking ass**le, naa now. Life is already dealing with it.. abi Idris dey mad ni? It is still 6:23 am, I still dey sleep.”

But it seems she had a change of mind as she later replied Bobrisky via her IG story saying: “I tell you say I no go reply you but walai if I spare you 30 min of my time, you go log out IG. You must be mad. Why did you bestie leave you? You d**k sucking bastard. Person wey bleaching cream don turn body to pig wants my reply. My dear gist no dey your hand o, last last you by yourself go use your mouth tell dem say you don dey fight me since last year because of man. The thing shock me, make man dey fight me because of man.

“I don dey try avoid you since 2019 but you no gree. Well, maybe now is the time. If e sure for you, mention the name of the man name wey make you dey fight me since 2019. Make we kuku scatter the table make the man wife know say the man dey f**k your dirty A**hole..”

The fight didn’t stop there as Bobrisky also replied the actress calling her “broke” and asking her how many people she has helped and why did people stop responding to “Giveaways” on her page? “Because you be audio! Fake life wan kill you”, he wrote.

The drama continues between the duo. Their fans have also been reacting to the issue as they both (Nkechi and Bobrisky) continue to “wash their dirty linen outside”.