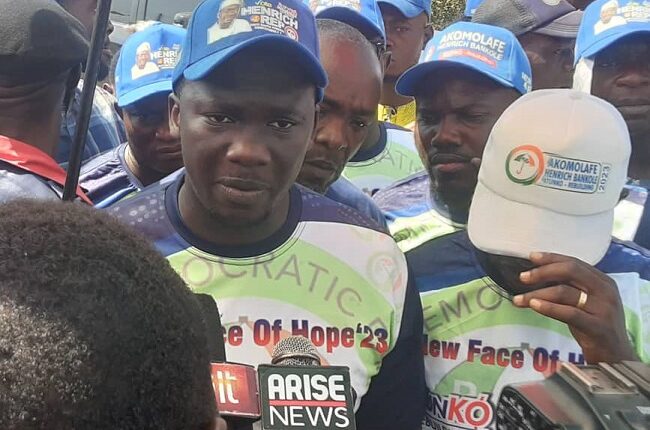 The House of Representatives candidate for Ekiti South Federal Constituency 1 under the platform of the People’s Democratic Party (PDP) in Ekiti State, Henrich Akomolafe has said that voters would reject the ruling All Progressives Congress (APC) in the 2023 elections due to the alleged ineptitude of the ruling party.

Akomolafe who spoke during a solitary walk around major streets in Ikere-Ekiti on Thursday by youths and residents of the community in support of his ambition explained that the economic challenges confronting the nation are enough reasons for the people to reject the APC and support the PDP for impactful governance in all sectors.

He stated that his decision to join politics and contest for the house of representatives seat was borne of his desire to offer the people quality and responsive representation that would have positive impacts on the socio-economic life of the citizens.

While calling on the youths, women and the aged to support his quest to represent the constituency in 2023, he promised when elected to initiate bills and motions as well as empowerment programmes that would have a direct impact on residents.

According to him, ” There are a lot of young people fighting and looking for ways to participate in government and as a 30-year-old man that is contesting for House of Representatives seat in 2023, you can see that it is time youth take their rightful place in the society.

” We want to be represented and you can see that I have shown my capability over the last few years and my people are in love with me considering the huge crowd we witnessed during this solidarity walk.

“You can see that things are not going well, the economy sector is going down daily and as a businessman, I am feeling the pains people are going through; that is the reason I am going into this contest to make a change; people want change and I am ready to offer myself for the task of bringing impacts in governance to the people.

“I am ready to make an impact and if the APC government are doing well, you won’t see people around for this walk, people are tired. PDP is ready to win from the presidential candidate down to the House of Assembly seat because citizens are tired of the maladministration of the APC.”

Akomolafe disclosed that his campaign team would next week begin aggressive enlightenment and sensitization for people to collect their permanent voter’s cards (PVCs) at the INEC offices in their respective LGAs.

The collection, according to him would enable the people to exercise their franchise in 2023 in electing him and other PDP candidates in the election.

“We have created an initiative to enlighten the people from every ward on the need for them to go and get their PVCs for them to vote because you can’t vote and effect the needed change without having your voters card,” he said.

Speaking, a PDP chieftain and former House of Assembly member, Wale Ayeni who commended the people for trooping out in solidarity for the PDP candidate, expressed optimism that he would be victorious in next year’s poll.

I will resolve my differences with Peter Obi soon ― Soludo