As UI produces another 153 PhD graduates 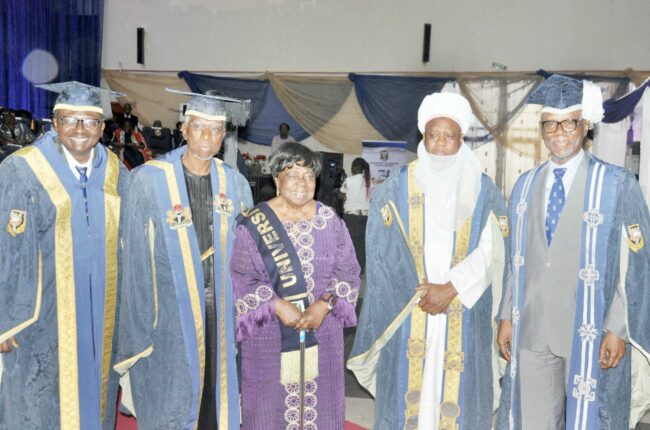 President Muhamadu Buhari has charged trade unions, especially ASUU to shun the weapon of strike action as a tool for pressing home demands.

He said “strike actions only compound the already poor state of our education sector and erode the national and international reputation of our public universities.”

President Buhari, who stated this in his address at the day-four of the University of Ibadan’s 74th Foundation Day ceremony, held at the International Confrence Centre of the university where doctorate degrees were awarded to graduates noted that the university system holds the key to the future of any nation, hence, there is a need for discipline and stability in the system.

His said: “It is disheartening that in the outgoing year virtually all the university trade unions; ASSU, SANU and NASU and NAAT declared protracted trade dispute, with dire consequences on our economy and caused unnecessary disruptions of the academic calendar of in our universities coupled with the consequent feeling of frustration and insecurity among our youths.

He assured stakeholders in the education sector that the Federal Government remains committed to the welfare of staff and students, saying “we shall continue to deal with the many contending issues in our various institutions within the limit of the resources available to the government.”

“On their part, universities will need to reciprocate the government’s gesture by striving at all times to measure up to expectations and justify the massive investment in them,” he stressed.

The president, represented by the executive secretary of the National Universities Commission (NUC), Professor Abubakar Adamu Rasheed, also lauded UI for its leading role in post graduate education and the production of the needed academic staff for tertiary institutions within and outside the country.

The Chancellor of the institution, the Sultan of Sokoto, His Eminence, Alhaji Muhammadu Sa’ad Abubakar III, in his address stated that “the recent ASUU strike has taken us back as a nation; we should not always resort to total strike except if everything else has failed, we can do better without strikes.”

He affirmed that Nigeria’s education system is not the worst in the world, saying “our universities are good; all we need to do is to raise the standards”

Expressing delight at witnessing this year’s 74th Foundation Day of the premier university, he noted that the most important outcome of a university education is the ability to think critically and creatively and contribute to nation building.

In his remarks, the pro-chancellor and chairman, governing council of the institution, Chief John Odigie Oyegun hinted that the university this year was ranked the first in Nigeria, seventh in Africa and among the first 500 in the world, the feat he attributed to the quality of the institutions’ faculties and entire staff.

He congratulated the management of the institution, its senate, academic and non-teaching staff and the entire university community for their hardwork and indefatigable spirit in sustaining the legacy of excellence  that is encapsulated in learning; uprightness in character, soundness in  judgment and incomparable in service.

The vice chancellor of the institution, Professor Kayode Adebowale, stated in his address that gross under funding has continued to be the greatest challenge facing the Nigerian University system and the UI is not an exception in this regard,

He disclosed that  a total of 153 candidates from various disciplines were bagged the Doctor of Philosophy degrees at the event, with the faculty of Education leading the pack with a total of 29 doctoral graduands followed by the Faculty of Arts with 24 graduands, while other faculties followed.

He congratulated the graduands for attaining the important milestone in their academic pursuits of a higher education, charging them to be good ambassadors of the university and to make positive contributions to the growth and development aspiration of the nation.

IPCentre boss charges youths on wrong use of internet