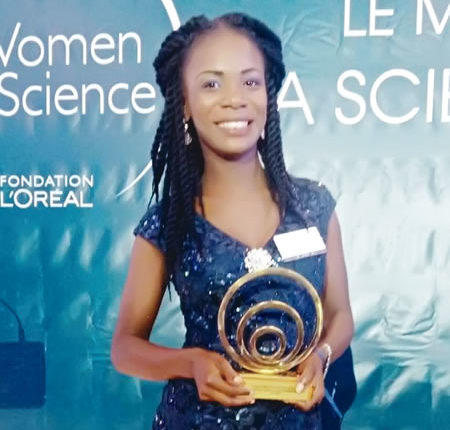 Two Nigerian female scientists, Mercy Temitope Bankole and Funmilola Fagbola, were among the 20 female researchers honoured with the 2019 Young Talents Awards for Sub-Saharan Africa on Friday, November 22, 2019 in Dakar, Senegal.

Executive vice president of the Foundation L’Oréal, Alexandra Palt, was quoted as saying: “The number of women in science is not yet significant: only 2.4 per cent of the world’s researchers are African scientists, of whom 30 per cent are women.

“Through the Young Talents Awards for Sub-Saharan Africa, we promote and support the continent’s remarkable female researchers. They play a key role to develop inclusive research in Africa, for Africa and conducted by Africans.”

Created in 1998, the regional award for Women in Science programme aims to promote women in the field of scientific research. Over the past 21 years, more than 3,400 women researchers from 118 countries have been highlighted.

According to a press release by the Chief of Project, Rosine Zadi, the 20 awardees were drawn from 15 countries and comprised computer scientists, engineers and biologists.

“They prove the diversity and crucial role of women’s scientific research on the continent,” Sadi said.

They also benefited from a four-day training designed to give them more resources to pursue their careers. The four-day training course, given by international experts selected by the Foundation L’Oréal, covered different dimensions such as leadership, management, negotiation, public speaking, media training and personal branding, according to the statement announcing their awards.

The award ceremony was witnessed by a high-level audience from all over Africa, including the First Lady of the Democratic Republic of Congo, Mrs. Denise Nyakeru Tshisekedi; Senegal’s Minister of Higher Education, Research and Innovation, Mr. Sheikh Oumar Anne; Regional Director of UNESCO West Africa (Sahel), Dimitri Sanga; and CEO Kudirat Initiative for Democracy, Hafsat Abiola, among others.

Mercy Bankole is a post-doctoral researcher at the Federal University of Technology, Minna, Niger State. She majors in Chemistry, with a research project on ‘Healing open wounds faster and better thanks to a nanocomposite.’

She had her PhD degree in Analytical Chemistry, Nanotechnology-related, and is a member of the FUTMinna Nano group, a section of the Centre of Excellence in Genetic Engineering and Biotechnology of the University of Technology, Minna, Nigeria.

She is presently the monitoring and evaluation officer for the Africa Centre of Excellence for Mycotoxins and Food Safety, Federal University of Technology, Minna.

Funmilola Fagbola bagged a B.Tech and M.Tech degrees in Computer Science of the Department of Computer Science & Engineering, LAUTECH Ogbomoso in 2010 and 2017, respectively. She is a currently a doctoral student in the same university.

For her doctoral research, which she commenced in the 2018/2019 academic session, she is investigating how nature-inspired deep learning models could be developed for misinformation detection in online social networks. This intensive research, being ably supervised by Professor Stephen Olatunde Olabiyisi, is strongly motivated by the rising trend in the use of social media and associated technologies to spread lies, propaganda, rumours, fake news and other related unverifiable contents, which in turn, has its significant contributions to the growing cases of abuse of drug use, socio-economic and political instabilities, global high mortality rate, high government spending, suicide, communal crisis, war threats and global terrorism, among others.

Ms Fagbola is the founder of the Rural Girls in IT (RuGiT) initiative, a startup NGO that is aimed at bridging the digital divide among women and girls within rural communities in Nigeria.

RuGiT also encourages and supports young girls to study STEM with major emphasis on ICT in a bid to promote sustainable development via technology and ensuring increased women inclusion and participation in Information Technology practices within Africa.

Funmilola’s long-term goal is to own a deep learning research laboratory of international standard and to become a Professor of Computer Science with strong track record of research breakthroughs in machine learning interdisciplinary domains with applications to relevant real-life problems in the context of Africa.

Adelabu and his futile chase in Oyo

Our favourite games and cartoons