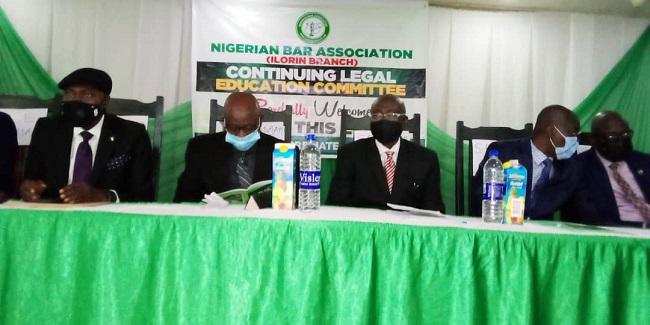 Nigerian Bar Association (NBA), Ilorin branch has raised the alarm over dwindling ethical values among legal practitioners in the state, citing cases of lawyers giving their NBA personalised stamps (seals) to non-lawyers for a fee.

The NBA also alluded to practice by lawyers standing as sureties for their clients in criminal matters, describing it as worrisome.

“My lord the chairman of this occasion, cases of unfair dealings within the rank of lawyers; failure to observe good faith and fair dealings with fellow lawyers; failure to adhere to the prescribed scale regarding the remuneration for services; indulging in illegal collection of money; champerty; subtle advertisement; display of flamboyant or lousy signs and notices that are of an unreasonable size and that are not sober; making extrajudicial statements on pending cases in court that is calculated to or is reasonably capable of prejudicing or interfering with the fair trial or court judgment thereon; indulging in any act that is calculated to gain or that has the appearance of gaining special personal consideration of favour from the judge; failure to observe courtroom decorum and failure to keep within the bounds of law in the course of representing clients are more pronounced now than ever before.

“A new dimension to it is that some lawyers now freely give their NBA personalised stamps (Seal) to non-lawyers to be affixed on documents (mainly agreements) prepared by the non-lawyers for a fee (usually a pittance) thereby allowing non-lawyers to carry out the practice of law.

“The practice of lawyers standing as sureties to their clients in criminal matters is another worrisome one, while there are allegations that some of our colleagues serve as a conduit pipe for delivery of gratification to investigators in criminal matters. The list is endless,” he said.

Also speaking, the chief guest lecturer at the event, Mallam Yusuf Olaolu Ali, SAN, expressed dismay over the news of lawyers giving their seals to non-lawyers, recommending disrobing and prosecution of any lawyer indulging in the unethical and unwholesome practice.

“Although there may be other reasons, it is apparent that the sad decline in adherence to the ethics of the legal profession by legal practitioners in Nigeria is not because of the absence of laws and regulations, but mainly as a result of inefficient and ineffective enforcement.

“We must all be ready to be guardians of the legal profession, such that we should all be willing to play the role of whistleblowers on the unsavoury conducts of colleagues in the profession. We are all responsible for the continuous existence of the respect and pride of place the noble profession has always enjoyed. It is either we do what is right or we say bye-bye to our beloved and cherished profession. We must all take a hint at the way policemen now treat lawyers. It wasn’t like that when some of us entered the profession close to four decades ago,” he said.

Olu of Warri stool: Peace in sight as parties meet with AIG