Tribune Business
By Sulaimon Olanrewaju On May 25, 2020 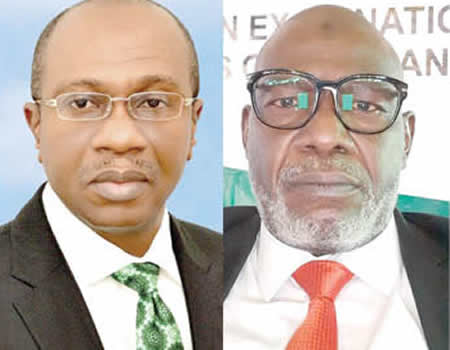 Foreign currency speculators will in the coming months face huge losses as the Central Bank of Nigeria (CBN) is set to resume dollar sales to Bureaux De Change (BDCs). With over 5,000 BDCs spread across the country receiving weekly allocations for sale to the retail end of the market, and rising accretion to the foreign reserves to over $37 billion, the naira’s future looks bright. SULAIMON OLANREWAJU reports.

The naira is facing its greatest risk from the COVID-19 pandemic as currency speculators continue to make spurious demand for dollar with the hope of making good returns from the rising gaps between official and parallel market rates.

Interestingly, the Central Bank of Nigeria (CBN) governor, Godwin Emefiele and President, Association of Bureaux De Change Operators of Nigeria (ABCON), Alhaji Aminu Gwadabe, have in recent weeks, analyzed the illicit business of currency speculators and the danger they pose to the economy and naira stability.

The two have also warned currency speculators about the looming danger for their trade if they refuse to retrace their steps as they will incur losses estimated at over N 10 billion in the next few months as the CBN prepares for BDCs’ return to the forex market after nearly six weeks of absence due to the COVID-19 pandemic and the need to protect operators.

Emefiele even went a step further appealing to industrialists patronizing the parallel market to stop such practices in the interest of the economy and for the sustainability of their businesses, failure which they would equally record same huge losses like the currency speculators.

The CBN governor said, “I know some of you are involved, stop now. By going to the parallel market, you are helping to overheat that market. Not only that, you will lose money because you would have bought it at a price that is not realistic. I can tell you that you are going to lose money. But we have seen your accounts already. We are appealing to you, please stop and let’s do what is right, what is legal, so that Nigeria can continue to be a good place for you to live in.”

Going further, he said, “We are going to provide more liquidity in the market so that people can stop going to the parallel market. Don’t go there because it is not good for you. But be patient, it’s going to be orderly.”

Both Emefiele and Gwadabe have huge experiences in the market to predict what follows after every major crisis.

During the 2016 currency crisis, the market got a major relief after the BDCs began getting dollar allocations from the CBN. That same scenario will soon play out as the CBN management and ABCON team begin to count days for the BDCs return to the market.

The CBN has come to realize that BDC operators can be the difference between naira recovery and depreciation during volatile and uncertain times. That’s especially true now that the local currency has come under intense pressure that is purely driven by speculative demand for the dollar. The BDCs are essentially operators that help get dollars to the end users no matter where they are and have for decades proven time and time again their relevance in stabilizing the naira.

According to him, the CBN’s planned lifting of moratorium on dollar sales to BDCs, reopening of the airports for air travels as well as global ease on restriction of movement are positive indications that dollar flows to the economy will soon improve.

He said the naira has been exchanging at N461 to a dollar at the parallel market but will be upbeat once dollar sales to BDCs commence.

Gwadabe said, “The return of over 5,000 BDCs to the forex market will add great strength to the Naira and lead to major capital losses for forex speculators. It happened in 2016 and it will happen again in 2020. The return of the BDCs will immediately boost Naira recovery and put the enemies of the economy to shame. We are committed to the CBN’s exchange rate stability and will take all necessary steps within set rules and regulations to keep the naira stable,” he assured.

Aside positive developments in the global economy, the CBN has taken steps to address the risks facing the naira, which will lead to rapid recovery for the local currency.

For instance, the recovery in the Chinese manufacturing sector and opening of the Asian tiger’s economy after months of closure due to the pandemic have raised the country’s crude oil demand, much of which would be bought from Nigeria. Such purchases will boost Nigeria’s dollar earnings.

Besides, Nigeria has been able to secure emergency funding of $3.4 billion from the International Monetary Fund (IMF) under the Rapid Financing Instrument (RFI). This fund will not only support Nigeria’s financial sector and address balance of payment hitches, but has boosted foreign reserves and financing to the budget for targeted and temporary spending increases.

Nigeria’s foreign reserves have reached over $37 billion, which represents enough buffers for the CBN to deal with any act of illegal economic behaviour like hoarding, speculation and conversion of local assets, among other illicit financial activities.

Gwadabe also added that the OPEC measures on sustainable price stability are commendable as many governments across the world have agreed to oil production adjustment targets and continued collaboration   with all their partners, a move that will benefit Nigeria.

He said the CBN has also officially reviewed the naira exchange rate to N380 to a dollar.  Aside devaluing the naira, the apex bank also adopted a unified exchange rate, and pushed the official rate of the naira to N376 to dollar for International Money Transfer Operators rate to banks; N377 to dollar for banks’ dollar sale to CBN and pegged CBN’s dollar sales to banks at N378, all aimed at attracting Foreign Portfolio Investment and strengthening the local currency.  The BDC operators are expected to buy dollar from the CBN at N378 per dollar.

Gwadabe said the naira rate review and assurances by the CBN governor, Godwin Emefiele, to foreign investors that want to repatriate their funds from the country are positive for naira’s continued recovery.

Gwadabe said ABCON’s reopening guidelines to all its members nationwide include on-boarding of the queuing crowd ticketing management application by all members known as ABCON 360°QSM portal with over 80 per cent members registered nationwide so far.

According to him, “We are also updating all regulatory obligations during the lockdown, fumigation of members’ offices/markets, distribution of second phase of face mask nationwide to our members. There is also the provision of wash hand basins, sanitizers at our distributions centres while members are to explore school fees, mortgage, subscription payments as one of their allowable scopes during post COVID-19.”

The ABCON boss said the pandemic’s impact on the naira was milder compared with the fate of other African countries’ currencies.

Amid huge capital flow reversal, driven by risk-off sentiment, currency rates of African countries show that the South African rand is the worst hit, down 20.6 per cent year-to-date. This is followed by the Angolan Kwanza which has depreciated by 16.1 per cent, Mauritius Rupee (-8.8 per cent), Nigerian Naira (-6.6 per cent) and Kenyan Shilling (-5.3 per cent) followed in that order.

Others include the Tunisian Dinar (-3.8 per cent), Morocco’s Dirham (-2.7 per cent) and the West African Monetary Union’s CFA franc (-2.3 per cent). Notably, the Egyptian Pound, up 1.3 per cent year-to-date, remains the best performer across the region.

Gwadabe explained that while an adjustment of the Nigerian naira from N360/$ to N385/$ broadly reflects the 6.6 per cent weakness observed in the official market, it must be noted that currency depreciation at the unofficial market is much deeper, currently at N461/$.

But going forward, the outlook for the naira is expected to remain relatively strong on the back of growing foreign reserves at over $37 billion, increasing global demand for crude oil, rising commodity prices and rising global trade.

He added that the BDCs remained at the centre of economic development with the capacity to attract needed capital for the development of the Nigerian economy. He said that Nigerian BDCs, like their counterparts in other emerging or developing economies, have what it takes to deepen the forex market through the deployment of technology and adhering to global best practices.