•as DG NIMASA commends CAS on prudent management of resources. 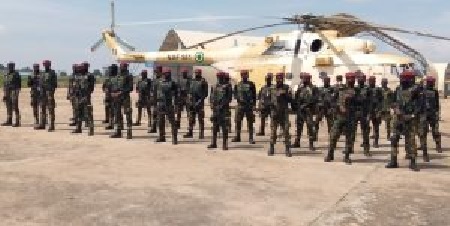 The Directorate of Public Relations and Information (DOPRI) has announced the readiness of the Nigerian Air Force (NAF) to deploying air assets as well as Special Forces personnel in support of the Nigerian Maritime Administration and Safety Agency (NIMASA) Deep Blue Project.

The Director of DOPRI, Air Commodore Ibikunle Daramola made this available to news

According to him, the Chief of the Air Staff (CAS), Air Marshal Sadique Abubakar, made the decision known while playing host to the Director General (DG) of NIMASA, Dr Bashir Yusuf Jamoh, at the Headquarters NAF Abuja.

The CAS noted, the NAF has maintained a long-standing, cordial relationship with NIMASA, with an MOU on Maritime Air Surveillance and Intelligence signed in 2013.

While explaining further, CAS said, despite the fact that the MOU had elapsed, the NAF had continued to play crucial roles, working very closely with the Nigerian Navy, using the NAF ATR 42 Maritime Patrol Aircraft (MPA), which had participated in several exercises within Nigeria’s maritime environment.

He noted that the DG’s visit was auspicious and would mark a new era in moving NAF’s partnership with NIMASA to a much higher level.

Air Marshal Abubakar disclosed that the NAF had recently, established a Combat Reconnaissance Group (203 CRG) in Gombe State to primarily deal with the security challenges in the North East and other parts of the North.

He noted that the Unmanned Aerial Vehicles (UAVs) that would be deployed with the 203 CRG could be moved to any part of the country, including coastal locations, especially given the crucial importance of the maritime environment to the survival of the Country.

According to him, “indeed, we are working towards establishing UAV Wings in Lagos, Calabar and Port Harcourt, to support the efforts of other security agencies in maintaining the security of the maritime environment”.

The CAS further disclosed that the NAF had planned to host the West African Air Chiefs Conference earlier in the year to address the security challenges in the Gulf of Guinea and West African Maritime waters.

He noted that NIMASA was expected to play a significant role during the Conference but the event could not hold due to the COVID-19 Pandemic.

The CAS assured the DG that the NAF would do everything possible to partner with NIMASA on the Deep Blue Project, as the Federal Government is doing everything humanly possible to secure Nigeria and Nigerians. Air Marshal Abubakar recalled that he was in Benin, Edo State about 2 weeks ago to assess the infrastructure available for the Project as well as identify some of the difficulties on the ground in preparation for the arrival of the special mission aircraft.

The CAS stated further that highly professional and properly trained officers, pilots and technicians had been selected for additional training to add value to the Deep Blue Project.

The DG NIMASA, in his remarks, commended the CAS for his prudent management of resources.

According to him, under the CAS’ watch, the NAF had witnessed a tremendous boost in its aircraft holding, through systematic acquisition and reactivation of platforms.

While stressing the importance of cooperation between the NAF and NIMASA, the DG noted that both agencies have mandates that are somewhat interwoven.

He reiterated NIMASA’s stance on zero tolerance for piracy on the Nation’s waterways, stating that the NAF’s deployment of its air assets and Special Forces would help tackle the issues head-on for the overall good of Nigeria’s Maritime Sector and the Nation as a whole.

Dr Jamoh, therefore, sought for more of the NAF’s support as the Deep Blue Project becomes operational by October 2020.

According to him, “the Deep Blue Project is a maritime security project, which aims to comprehensively tackle insecurity on Nigeria’s territorial waters and Exclusive Economic Zone, up to the Gulf of Guinea”.