My wife stole my money, poisoned me, sent assassins after me —Husband

•He beat me, dragged me on the floor, threw me out without pant ’cos he’s on drugs —Wife 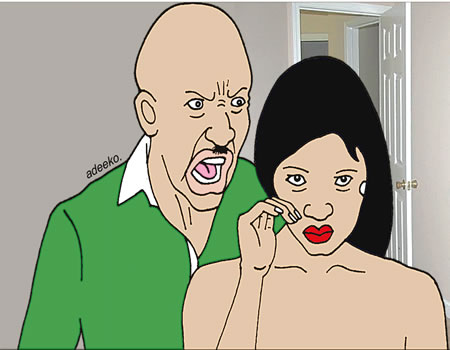 Adeyinka, who dragged his wife to court, alleged that she starved him of food because she was not a good cook.

Adeyinka added that Adenike plotted to kill him by poisoning him.

According to the plaintiff, the defendant on realising that she failed in her first two attempts, sent hired assassins after him.

The plaintiff prayed the court to put a stop to their relationship and award him custody of their two children.

Adenike acceded to divorce but refuted all that her husband said.

She pleaded with the court not to grant her husband’s prayer on their children. Adeyinka, according to her, will be a bad example to them.

“I give my wife a meaningful amount to prepare food for the family but she would end up wasting my resources and starve me because she’s a bad cook.

“Adenike is not organised. She doesn’t prepare breakfast earlier than 2:00 pm. By this time my children and I would almost have been dead with hunger.

“My wife later stopped preparing our meal.  She would either buy rice or spaghetti for our children from road side food vendors.

“I never enjoyed my wedlock with my wife because it was full of crisis. Adenike fought me at every given opportunity while her father was always mediating in our differences.

“My lord, I never knew my wife hates me so much as to want to kill me. She poisoned the drink she served me in her shop and I almost died. I vomited blood and was on admission in the hospital for a month.

Adeyinka further stated that, “I run a hotel and asked my wife to oversee activities there. To my surprise she connived with my staff to steal my money. It was my brother who called my attention to this.

“Adenike refused to give an account of how she ran the business and we eventually ran into debt. I was forced to borrow money every now and then to pump into the business but there was little to show for this because my wife was constantly frustrating my efforts.

“My lord, my wife was unfaithful to me. She was always in conversation with a particular man who is her lover. I saw the pictures she took with this man on facebook  and once recorded their conversation on my phone. (He presented it to the court as evidence).

“Adenike plotted with this man to kill me. This man with two others kept trailing me and once double crossed me on the road. I would have been a dead man by now but for God.

“Adenike left my home without my consent and kept her whereabouts away from me. She failed to ask after the children since she left me about five months ago.

“My lord, my prayer is that you dissolve our union and award me custody of our children because Adenike cares less about their welfare,” he said.

The defendant stated in her testimony that: “Life as Adeyinka’s wife has been traumatic. I never enjoyed my marriage with him because he is reckless and difficult to live with all because he is on drugs.

“My lord, I agree that Adeyinka and I part ways, but I entreat the court to put our children in my care so that I can raise them properly, but make him responsible for their welfare and education,” she told the court.

“Adeyinka is a drug addict. He started beating me from the outset of our marriage. He didn’t stop even when I was pregnant. My husband would beat me and drag me on the ground not minding if I lost our baby.

“He once beat me and sent me out of the house in the night without pants on.

“He beat me to a pulp a day to the christening of our second child. He went irate because I sought to know who the ladies he brought to our home were.

“Any time he beat me, he would leave a mark on me and I would constantly lie to people that I fell.

“He extended this hostile behaviour to our children whom he beats with wire.

“My husband was the one that deflowered me but rather than place value on me, he treated me like a slave.

“He would threaten me and refused that I go any other place apart from our hotel. I was always kneeling down to beg and appease him any time he raised an accusation against me and these were always false,” Adenike explained.

The defendant added that, “Adeyinka lied that I’m a bad cook. I prepare him three different foods for breakfast because he’s choosey.

“My lord, I didn’t poison him. He drank Soda Water despite knowing that he has ulcer. This led to the crisis he had. He was on admission for just a week and not a month.”

The defendant added: “My husband is intolerant and was always asking me to sack his staff.

“He lied that I connived with the staff to steal money. I had my shop and was running my business successfully before he requested that I abandoned it and join him in the hotel.

“My lord, I work round the clock to ensure things were running well there. I was trekking from the hotel to our house with our maid every night as a result the curfew during COVID 19 crisis.

“Instead of appreciating me, all he did was to accuse me of stealing his money.

“I borrowed meaningful amounts on his behalf from a microfinance bank when he was building the hotel but he has refused to pay me back.

“My lord, my property is still in his house while he locked and kept the key to my shop and forbade that I go there.

“I pray that the court rule that he allow me remove my property from his house and also open my shop so that I can bring out my goods,” she concluded.

Giving his judgment, the court president, Chief Ademola Odunade ruled that their marriage be dissolved.

He gave custody of their first child, a male to the plaintiff and the second child, a female to the defendant.

The plaintiff was ordered to give the defendant N5, 000 every month for the feeding of their second child and be in charge of her welfare, education and health care.

Odunade further ruled that the plaintiff allow the defendant pack her belongings from his house and her goods from her shop.

I am too fat