Minimum wage is issue of life and death for workers —Adeyemi 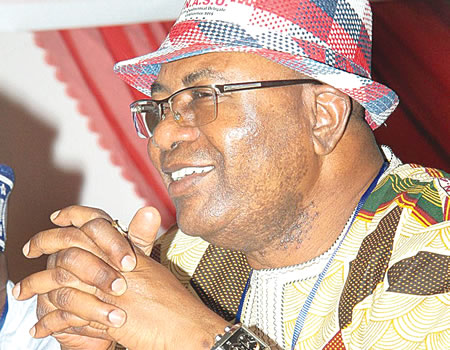 The Deputy President, Nigeria Labour Congress (NLC) and leader of Organised Labour to the Joint Labour/FG Technical and Minimum Wage Committee, Comrade Peters  Adeyemi, spoke with Assistant Editor, SOJI-EZE FAGBEMI, on the lingering issue of the new national minimum wage, the deliberate delay by the government and its implications.

The issue of new national minimum wage is still dragging on and some governors are saying that they cannot afford to pay as much as N56,000 being demanded by Labour. What is your take on this?

For us in the movement, if we are to make that demand right now, that, clearly is not going to be labour’s demand. In Nigeria today, N56, 000 is clearly not what any Nigerian can survive on. Labour is convinced that N56, 000 minimum wage is doable. It is doable in the sense that when you put all the indices and parameters in place, you find out that N56, 000 cannot give a comfortable life to an average worker in a month. Let us look at what we are talking about, we are talking about a workers who has children, he has to pay school fees, health-care and has other dependants. The cost of drugs and food stuff has tripled since the last minimum wage law was passed in 2011.

I have said severally that you also need to put into consideration even the worth of our currency, the Naira which government policies have bastardised.

I have said again and again that those in government don’t want to pay good salaries so that they will have enough to steal. If Nigerian workers are well paid, some of these surpluses that are being looted won’t be there. You find today, with all the efforts of the current administration, under President Buhari that the anti corruption agencies have unearthed so much startling revelation of massive looting of our treasury. Is it not mind boggling that you find a situation where people have amassed so much wealth that they have to abandon them in places they cannot visit and whereas an average Nigerian worker is suffering and wallowing in abject poverty.

I keep on challenging our elite and the ruling class, when they say that N56, 000 is not payable, ask them, some of the wines they take, how much does it cost? Our ruling elite must not stir up crisis. They must not take Nigerian workers for granted for too long. Because you see, if pushed to the wall, the suffering are going to turn back and face you.

What do you mean by that; even when same people, especially the governors who are against it are gearing up for re-election?

This N56, 000 minimum wage will determine who gets elected and re-elected again. The time of reckoning is drawing nearer. Maybe by this time next year, they will start another round of campaign and promises. Nigerian workers will not fold their arms and go and vote again for people who don’t put their interest at heart. It will not be possible. Nigerian workers will take their destiny into their hands. And we are going to use these statements they are making now to determine their fate. Any governor who says N56, 000 is not payable and he cannot pay salaries is hanging his own neck and the neck of the candidate his political party will present because Nigerian workers will vote against anti-progressives elements who want to go back to government house. Those who do not have the interest of Nigerian workers at heart, who want to enslave Nigerian workers, will not get to the government house.

Those of us in the labour movement, this issue of minimum wage is critical for us. It is about life and death. N18, 000 as of today cannot buy you anything.

If Nigeria labour movement is going to present a new demand today, definitely the N56, 000 will not be our demand. Probably, we would have been asking for double of that because the situation has changed drastically from the time we made the submission and now. The cost of everything has gone up. Like I insisted, fight against corruption will only succeed when workers are well taken care of. The anti corruption war is doomed when you pay workers peanuts because when people don’t have means of survival, they have to look the other way. It is not about the issue of morality. When there is hunger, there is nothing like morality. It is not that our country is not endowed; it’s just that a few elements in the society are richer than the state. A few elements within the society have stolen the entire money. And they will continue to live in affluence; their children’s children will continue to live in affluence. What we are talking about here is not about even distribution of Nigeria’s wealth, we are saying those who create the wealth should be well looked after.

The truth of the matter is that you know that labour donesn’t just go and start making demand, we have done some arithmetic. We have done some homework and we have a mandate. It is not that Ayuba or Kaigama or Adeyemi just stood up one day and said we want N56, 000. That amount was as a result of some works that have been done as at that time. And the various organs of both NLC and TUC endorsed it and gave the go ahead. So, for us to reduce what we have presented, we have to go back. When they tell you that they can’t pay salaries now, the truth is that are some states not paying salaries? If there is a will, there must be a way. It is about how these states consider what their priority is.  As we speak, there are states that do not owe salaries. And it is not as if they are wallowing in excess of resources. It is about commitment. What is it that the Federal Government has not done to ensure that these salaries are paid? You are aware of the bailout, you are aware of the Paris Club first tranche, now we are talking of second tranche. The truth is that there must be penalty for governors who don’t pay salaries.  Those of them that are saying that they cannot pay N56, 000 because it is too much, so what are they supposed to be paying?

The minister said during the ILC that the minimum wage committee will be constituted in two weeks, that time line has passed and nothing has happened. Some have expressed fear that the government is deliberately delaying the minimum wage so as to use it as a campaign tool in 2019?

Clearly, there is a deliberate attempt to delay the inauguration. What does it take as soon as FEC gave the approval; they should name the chairman, and tell stakeholders to submit the names of their people. So, do we still need to make noise before the committee is constituted? This delay is just a deliberate one to frustrate Nigerian workers. We are not happy about it. But let me say this. If they wait because they to use this issue of minimum wage as a political instrument or whatever, they are going to do it at their own peril, because as at that time, the anger of the Nigerian workers must have built up. You were at the May Day, you saw what happened. I hope they don’t do that. In fact, it is going to be in the best interest of this government to conclude with the issue of minimum wage before the end of this year, get the law out and let it become payable. Because, ideally if the committee starts work now, it should be able to conclude in three months. And then push it to the national assembly. And let the national assembly promulgate law.

But will labour continue to wait endlessly till anytime the government decides to constitute the committee?

Yes, we have to wait because the NLC cannot operate outside the general society. That is the problem. There are people who are so sentimental about this government. You were here when this government increased the price of petrol. When NLC said we wanted to challenge that, Nigerians were saying to us, they were ready for the increase, t

hat labour was just causing trouble. When we said stay at home, they stayed on the street, driving their vehicles up and down. That was the certificate that this government got. So, if we don’t use our brain even as labour leaders, the tendency is for us to be accused of wanting to distabilise this government. Don’t forget that this government came in with massive popularity. And they rode on that popularity until the Nigerian people are beginning to be unhappy with this government. So, now, if you do a popularity rating of this government, you will find out that due to the hunger in the land, the popularity has gone down. So, labour movement had to be conscious of this because the tendency is for us to be accused of wanting to sabotage this government. That is why everywhere I go, people say labour is no longer what it used to be. That is the truth, I accept that. But the truth is that the leadership of labour will not mobilise itself. It will mobilise Nigerians. And if Nigerians prefer to go with the president rather than go with the labour movement, we have to re-strategise. So, it is only now that we can confront this government.

Prior to this time, people were still dancing to the music of change. But now, the reality is beginning to dawn on everybody. That was why you saw what happened at the May Day. It is not longer our fault.

Nigeria at 62: Politicians deliberately chose to impoverish us —TUC