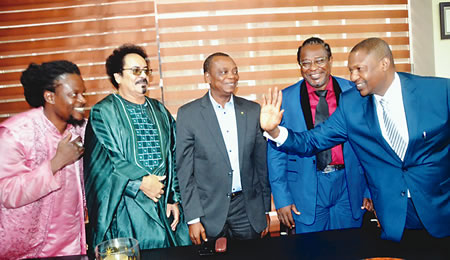 Attorney-General of the Federation and Minister of Justice, Abubakar Malami, (SAN), has restated that the era of monopoly as a government economic policy is gone for good in Nigeria, just as he noted that the decision in licensing Musical Copyright Society Nigeria (MCSN) as a collecting society is in the best interest of the nation and in accordance with international best practices.

Malami made the declaration when he received a delegation of the board and members of the newly approved collective management organisation of the Musical Copyright Society Nigeria (MCSN), in his office recently.

The delegation, led by the Chairman of MCSN, Orits Williki, was on a thank you visit to the minister for his intervention and directives in approving MCSN as one of the official body of the collecting societies.

Malami, however, advised the body to go about its business, because it has the support of government.

He added that, “the decision to license MCSN as a collecting society is in the best interest of the nation and the citizens and it is in accordance with international best practices. I have the authority and directive of President Buhari Muhammadu to look into any or all forms of monopoly in any sector of the economy and dismantle it. I wish you every success in your operations.”

In his remarks MCSN’s Chairman, Orits Williki, appreciated the decision of the Federal government, as well as the AGF for his intervention and resolution of the problem which has been going on for more than two decades.