Man flogged in public for beating his mother in Anambra 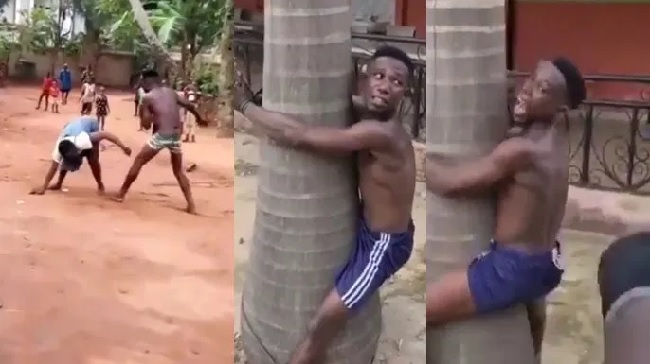 A middle-aged man, identified as Sunday Maduegbunam, who was seen in a viral video flogging, kicking and boxing his own mother, has been caught and flogged publicly by the youth of the community in Ogidi, Idemili North Local Government Area of Anambra State.

According to the one minute-fifty five seconds video, the man was seen using a long and heavy stick to beat the elderly woman.

At some point in the video, he dropped the stick and resorted to slapping, boxing, kicking and stamping on the fallen woman. He attempted to strangle her to the consternation of onlookers, mostly women and children.

However, after the video had gone viral in the social media space, the youth of the community who came across the video, looked for the boy, identified him and interrogated him.

Maduegbunam ‘s identity having been confirmed and his confession obtained, the youth applied the Ndigbo traditional discipline on him, to serve as a deterrent to others for such, beating one’s parents, is an ‘alu’, abomination in the land.

Though he confirmed that he was indeed the person in the video, admitted to have committed the offence and begged for forgiveness, the youth were not deterred in their determination to make an example of him.

FULL TEXT: A viral post on WhatsApp is asking N-Power candidates to verify the status of their application and see if they have been shortlisted for the batch C cash grant…Man flogged in public for beating his mother in Anambra

Can cryptocurrency actually replace fiat anytime in the future?

A Beginner’s Guide To Bitcoin

What is the best time to sell your cryptocurrency?