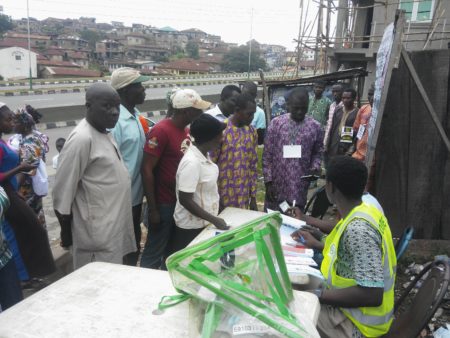 The Ogun State Governor, Senator Ibikunle Amosun, has commended the Ogun State Independent Electoral Commission (OGSIEC) on the simultaneous accreditation and voting process adopted in the conduct of the election.

The governor said this shortly after voting alongside his wife, Olufunso,  at the Ajura Ward 4 Unit 3‎, in Obafemi Owode Local Government, on Saturday.

He noted that the system of accreditation and voting system were the best option, assuring that the council areas would bring development to the people.

Governor Amosun said the council election is more important than the governorship election because it is the closest government to the people.

“I feel great because we are not just voting today, but we are making history. I have said it that this election is more important than the ‎governorship election, not just because is the closest to the people, but because in the history of our state.

“We are about 40 years and a half now and this is the first time we would be having LCDAs alongside our local governments so, we are making history.

“I am happy with the situation reports at my disposal and I want to assure our people that this will bring ‎development to the people.”

Meanwhile, the chairman of the Peoples Democratic Party (PDP), Honourable Sikirulai Ogundele, has called for the cancellation of the outcome of the last Saturday council polls.

He said this while speaking with newsmen in an interview in Abeokuta, that the call became necessary in view of irregularities and violence that characterized the election.

The chairman said that there were cases of snatching of ballot boxes as well as non-availability of electoral materials in some areas.

Ogundele said that a member of his party, identified as Goodluck, who was trying to prevent ballot box snatching was shot in the chest by some political thugs at Ilara -Remo, in Remo North Local Government and that the victim is receiving treatment at the Babcock University Teaching Hospital, IIishan-Remo.

Also , the 2015 governorship candidate of the Unity Party Of Nigeria (UPN) the state, Mr Rotimi Paseda, described the election as “deceit”.

Paseda, who spoke at his Omu residence in Odogbolu Local Government, after the election said that election materials were not sufficient and that  they had to travel to Odogbolu town to request for more materials.

“We cannot do anything else except to make our voice heard and show our dissatisfaction.

“As far as we in the UPN are concerned, this local government election has not been credible.

“Some of our candidates have been getting video reports to prove the irregularities and that is what we will take to court later.

“If we cannot get judgment in court, we will abide by the rule of law, but there is a public opinion court, and that is where we are going to meet.”

“We will ensure that we post  the video recordings all over the social media and as long as they are embarrassed, it is  enough for us,” he said.

PATH TO NIGERIAN GREATNESS: On the campaign trail Charter of stability and progress*