•Polytechnic management behind our arrest, prosecution —Workers •We have no hands in their travails —Management

TUNBOSUN OGUNDARE chronicles the protracted crisis in the Lagos State Polytechnic (LASPOTECH), Ikorodu, and the seemingly endless search for peace 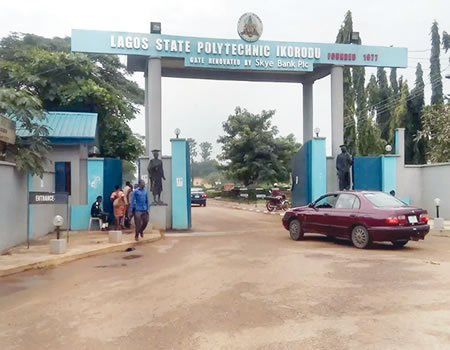 These are not the best of times for the Lagos State Polytechnic, Ikorodu, as the 40-year-old institution has been dogged by one crisis or the other since 2016 when the implementation of the new Consolidated Tertiary Institution Salary Structure (CONTISS 15) migration pitched the workers’ unions against the management.

CONTISS 15 migration is the movement of staff in tertiary schools from one salary grade level to the next level, provided such workers meet certain conditions as stipulated by the National Board for Technical Education.

These conditions include, among others, that a worker must have been employed before August 1st, 2009; must possess the basic academic or professional qualifications (or both) applicable to his/her competence, in addition to compliance with institutional policy; and must have also spent a minimum of two years on his or her current position before the year of migration.

So, since then, LASPOTECH has been on and off industrial actions by workers such that the relative peace once enjoyed by the polytechnic over the years has vanished.

The crisis became deeper in January this year as the main campus of the institution where the principal officers have their offices turned to a battle ground between the workers and the school authorities.

As if that was not enough, the crisis escalated on Friday, March 29, as the battle ground shifted to the law court, this time around involving some workers (mostly arrowheads of the existing spat with the management) and the police.

The affected workers have insisted that the school management is behind the new development.

The eight workers were alleged to have attempted to burn with petrol two officials of the Joint Admission and Matriculation Board (JAMB) who came on official assignment to the school ahead of the just concluded Unified Tertiary Matriculation Examinations (UTME).

LASPOTECH, just like many other tertiary institutions, was designated as one of the Computer-Based Test (CBT) centres, and the officers were on campus to ascertain the level of preparedness of the institution for the examination.

Tribune Education spoke with one of the concerned workers, Mr Abiodun Awoyemi, who is the chairman of the local of the Senior Staff Association of Nigerian Polytechnics (SSANIP) over the weekend.

He narrated: “On the day of the incident, we were protesting over the wrong implementation of CONTISS 15 and other issues, including the continued staying in office of our current crop of leaders.

“So, we went to the ICT unit to drive away one of our members who was working there as part of our protest, because we didn’t want any ad hoc staff to do our work since we are on strike. That was what we did.

“The Divisional Police Officer of Sagumu Road Police Station was on campus at the time. He saw us leading some of our lecturers out of the school gate. But we were surprised to read in an online media that we wanted to burn down JAMB officials on campus and that we also attacked the school’s ICT director. We didn’t do any such thing.

“That was how we were invited last week by the police to their station and consequently detained. We were even cajoled to go to the police station because somebody like me was not mentioned in the petition by the LASPOTECH authorities to the police.

“The petition was read openly with no ambiguity to all of us without mentioning names of about seven of us out of 10 people named. But since we are their leaders, we just said we should follow them to the Special Investigations Bureau office. They said the invitation was on the order of the commissioner of police.

“That was how we were detained and taken to a magistrate’s court for trial. The case could not be heard on that day. It was on Wednesday, and we were granted bail; but because we couldn’t perfect all our bail conditions that day, we were taken to Kirikiri Prison.”

Thus, according to his account, Awoyemi thought he just wanted to follow colleagues as solidarity with the mind of returning home that day but ended up spending two days in Kirikiri Prison, along with seven others.

He believes the issue is a frame-up by the school management to silence him and his colleagues on their agitation.

“The case is that of high-handedness on the part of our management and in connivance with the JAMB registrar, Professor Is-haq Oloyede. I believe we all know that Oloyede is noted for his dislike for anything unionism. He demonstrated that when he was the vice-chancellor of the University of Ilorin. We should remember the Ilorin 49.

“So, we wouldn’t be surprised if he is colluding with our rector to tame the union. Our rector wants to turn himself to an emperor. Well, we are already in court, and our case has been adjourned to May 23rd.”

When asked about the purported dismissal of four members of staff by the polytechnic and that some of them are also part of those facing trial, he said the dismissal issue was also part of the high-handedness of the management.

“Workers’ protest in trade dispute is legitimate anywhere in the world, and LASPOTECH cannot be an exemption. We know we are fighting a just course. The management just wants to give the union leaders a bad name so as to nail us.  But we won’t allow that. Our protest is for the good of all the workers.”

When asked why the academic staff members who are known for leading a campaign for a cause such as the one SSANIP and NASU are championing now are not involved, he said the academic staff union had been castrated since for long by the rector and his management.

But the management of the institution has insisted it has nothing to do with the travails of the eight workers.

Speaking with the Tribune Education over the weekend, the institution’s deputy registrar (Information & Public Relations), Mr Olanrewaju Kuye, insisted the matter that brought the affected staff members to court was a case of alleged attempted murder, and that it was strictly between them and the police and has nothing to do with the protracted workers’ dispute with the management.

The eight workers, he insisted, “were alleged to have involved in assaulting with petrol two officials of the Joint Admission and Matriculations Board (JAMB), and also physically attacked and injured the director of ICT unit of the polytechnic.”

He said the JAMB registrar, Professor Is-haq Oloyede, had personally reported the case openly to the Minister of Education, Mallam Adamu Adamu, three days after the incident (Monday, 1st April, 2019), while briefing the latter about JAMB’s preparedness for the UTME.

Kuye said the affected JAMB officials had also earlier reported the same incident to the police at the Sagamu Road Police Station in Ikorodu.

“The police have since then taken over the case. The issue has nothing to do with the school management. It is eight workers versus the police,” he said.

But when asked what he knew about the purported petition by LASPOTECH authorities to the police against the affected workers accusing them of assaulting the school’s ICT director, Kuye insisted that the issue that led to the court case against the workers was the alleged assault on two JAMB officials on campus; but that the polytechnic is already finding a lasting solution to the lingering disputes with the workers.

A girl’s story on strength, weaknesses