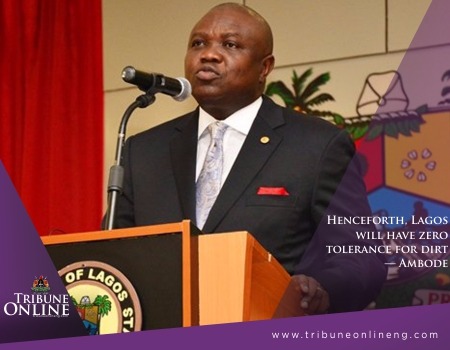 LAGOS state governor, Mr Akinwunmi Ambode, has said that his administration will require about N60billion to give public schools in the state a befitting facelift as well as set up new schools especially in the riverine areas.

The governor disclosed this while speaking with newsmen, saying though his administration had spent about N10billion in the last 22 months to boost the quality of education in the state, there was still a lot to be done in the sector.

This was just as Governor Ambode assured that the school feeding programme tagged, “A-Meal-A-Day Programme,” would be introduced soon as his administration was working towards a sustainable plan for the programme to cater for the eventual take off.

Ambode said the state government had carried out a study last year on the interventions needed in public schools and the construction of new ones, assuring that the funds set aside in the 2017 Budget for education would be judiciously put to good use.

“The result showed that we need about N60billion to put our schools together. But we have started the massive rehabilitation of our schools last year and you can go round to confirm. We expended about N10billion trying to put the worst set of schools back in place.

“This year, a major intervention is also going to take place from our budget to see that at least let the existing schools even compete favourably with the private sector schools. That is the whole idea. I went to a public school and I must give back.

“Then, some of our riverine areas don’t really have schools. If you go to Ilaje and other places, there are no schools there and you see people taking canoes to go to school. So, that intervention is what we are also doing this year to see that there is continuous capital expenditure in public schools,” the governor said.

He said over 2,300 qualified teachers have also being employed and posted across the various primary and secondary schools in the state to improve the performance of students, which according to him is already yielding results.

Governor Ambode, while explaining the delay in the take off for the A-Meal-A-Day programme, assured that his administration was working towards a sustainable plan for the programme to cater for the eventual take off.

According to him, since the programme is a combination of resources from the Federal Government in partnership with state governments, it is pertinent that necessary funds be provided to prevent hiccups after the take-off.

“Yes, it was in our manifesto but again in practical terms, we are still on it. The number of students in Lagos and the budgetary provision also do not really match for us to start. I don’t like a situation whereby we come out for two to three months and then stop.

“I will like to sustain it when we start and don’t forget also that the project is a combination of resources from the Federal in partnership with state governments. So, obviously in terms of provisions and resources, we in Lagos think we should have a long drawn sustainable plan and that is why we have not started it. What I can assure the people is that we are working on it,” Governor Ambode said.