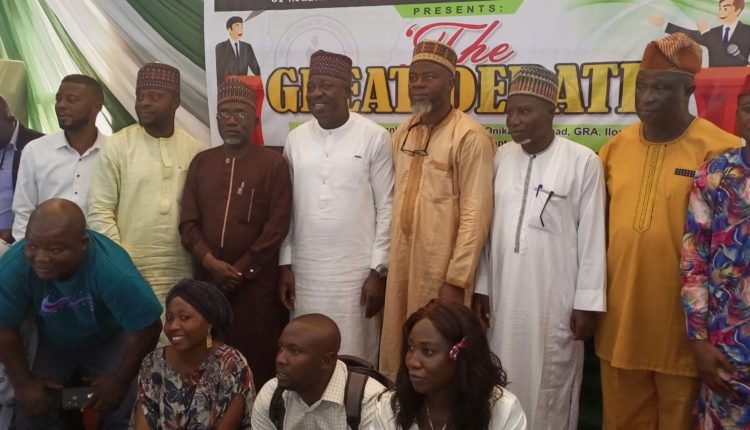 Senatorial candidates of leading political parties for the Kwara central senatorial district of Kwara state have identified high youth unemployment and prevailing poverty among challenges to tackle when elected to represent the area in the forthcoming 2023 general elections.

The candidates, who appeared on the political debate programme of the Correspondents’ Chapel of the state council of the Nigeria Union of Journalists (NUJ) in Ilorin on Monday said that investment should be made in youth, who formed a majority of the population in the district.

The All Progressives Congress (APC) candidate, Mallam Saliu Mustapha, gave the reason for his absence through a letter to the chapel, saying he was out of the country.

The politicians, who lamented the increasing rate of insecurity in some parts of the district, said they would encourage youth investment in agriculture practice and value chain to make youth more productive.

The Labour Party’s candidate said that he would encourage the revitalization of family vocation which he said the district is known for, e.g. local fabric weaving, pottery, etc, adding that it is one of the ways to empower youth and reduce unemployment and prevailing poverty.

Mallam Akanbi said he was contesting to improve legislation in the district, adding that quality legislation should be able to put the government on its toes, represent people well, cause youth development and relate well with workers and youth.

Mallam Bolaji Abdulahi of the PDP, who commended the leadership of the chapel for the initiative, said that the next general elections provide constituents with the reset button to change the narratives of poor leadership in the country and course sustainable development in the district.

The PDP senatorial candidate said that a strong voice must represent Nigerians at the National Assembly due to present challenges in the area, adding that youth in the district should be encouraged to do science courses in order to boost economic development.

In his letter to the chapel, Mallam Mustapha of the APC expressed confidence in his ability to provide the senatorial district with a more commendable representation against the efforts of his predecessors.

He said his agenda includes advocating for laws and reforms, collaborating with the Kwara state government and reducing poverty through expanded empowerment initiatives.

He said that government should encourage community policing, and equip security agencies to do more while charging clerics to unite to fish out bad eggs among them.

Apaokagi, who said that credible people are being denied the opportunity to participate in an elective poll, said that he would encourage a law to make civil servants contest and go back to service if they fail.