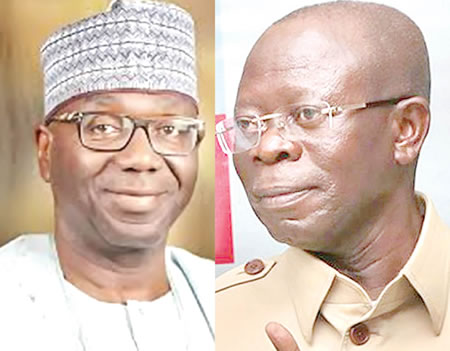 The Kwara State chapter of the All Progressives Congress (APC) slid into some disquiet moments after the last governorship primaries. BIOLA AZEEZ examines efforts by party leaders to rescue the party from crack.

Like most state chapters of the All Progressives Congress (APC), the governorship primaries of the party in Kwara state threw up contentions, arguments and divisions. As usual, opinions were divided before the primaries. There are groups who believed that it was the turn of Kwara North to produce the governor for the state, while a number of other chieftains believed that the slot should go elsewhere. The battle was intense as tempers rose in the build-up to the primaries.

Following the primaries that produced Alhaji Abdulrahaman Abdulrazaq from the Kwara Central, tempers further flared as the party faithful, who favour the emergence of the candidate from the Northern Senatorial District ,won’t just give up.  Members were left divided along different religious, ethnic and cultural sentiments.

Some aggrieved members of the party, who claimed to be concerned foundation members, had alleged unfair treatment of their aspirants during the party’s primaries, as they laid siege to the secretariat along old Jebba road in Ilorin, the state capital.

The aggrieved members had slept on mats in the compound of the secretariat for some days before taking their protest to Abuja.

The protesters, like some other groups, had expressed their grievances over conduct of primaries that produced Alhaji Abdulrahaman Abdulrazaq as APC governorship candidate, while they also complained that the emergence of candidates for federal and state legislative positions left too much to be desired.

Spokesperson of the group, Isiaka Warah, said that his members had planned to keep vigil within the state secretariat for as many days and night to press home their demand for fairness.

“We are concerned about coasting home to victory in the coming elections in the state and one of the ways to ensure victory is to bring all stakeholders together in a manner that can guarantee trust, oneness and dedication among all members,” he said.

Mr. Warah, who was also House of Representatives aspirant in the last APC primaries, described the just-concluded APC primaries as “a modified consensus mode of primary, since results of the last exercise have been discarded by the National Working committee (NWC).”

He, therefore, demanded the following positions: governorship slot; two senatorial slots; House of Reps slots; House of Assembly slot and agreeable terms on the formation of the next government for foundation members.

He said: “Those are what we considered time tested solutions to problems bedevilling the party at this material time. Anything short of this will not only be counter-productive but inimical to our common interest ahead of 2019 elections.

“We invite men and women of good conscience to join in this crusade that is aimed at repositioning our party ahead of the big task.”

Seeing the determination on their faces, the vice-chairman of the party, Samari Abdullahi, could only appeal to the protesters not to do anything that will affect the chances of the party in the 2019 polls.

He said: “The people you are seeing here are well behaved. These are foundation members of APC in the state. They are people that will want the progress and development of the party in the state. They will not do anything that will not augur well for the party. They are not complaining per se about the outcome of the primaries, what they are complaining about is that, as foundation members, most of their members’ victories have been side-lined.

“They are not even sure that after the formation of government they will be carried along in the distribution of positions. I think that is their major concern.”

Besides the clamour for zoning, one other feature of the last party primaries in the Kwara central senatorial district is the emergence of governorship and senatorial candidates from same Ilorin West local government area of the state.

However, while Ibolo and Ekiti blocs appeared to have been settled, the Igbomina stock is anxiously awaiting what it will take home as far as the appropriation of political positions is concerned.

Ifelodun has had the opportunity of producing a governor for two consecutive terms, in person of Alhaji Abdulfatah Ahmed, the incumbent Kwara State Governor. He is also the senatorial candidate of the Peoples Democratic Party (PDP) for the forthcoming general election.

Leaders of APC in Ifelodun local government area argued that the only way to make the area impenetrable for PDP is to give the area the running mate to APC governorship candidate, Alhaji Abdulraham Abdulrasaq.

Some young elements in APC in that local government, led by Saliu Olaitan, a foremost youth leader, however, submitted that the way to attract the votes of the youths is to give the slot of deputy governor to one of them. He added that such a step would make their work easier.

Saliu said of the situation: “Conventionally, running mate will go to a Christian but we desire a youth and member of the foundation group of APC. We desire a young man less than 50 years of age who will not only assist but can be mentored for the general growth of the younger generation by our highly successful governorship candidate. Alhaji Abdulrahman Abdulrasaq needs a loyal young man that can run around for him and the state for the benefit of all.

“He should not be paired with those that have always indicated interest in becoming the governor of the state. It will not serve the party and the state well repeating what is known to be the norm in the camp of Dr. Saraki by pairing our highly resourceful governorship candidate with a feeble and tired old man,” he said.

In another related submission, Steve Adeola, secretary of APC Christian Youths in politics said that the group is capable of mobilising Christian youths in all the nooks and crannies of the state, leveraging on the tentacles of Christian Association of Nigeria (CAN) in the state.

He stated: “We are sure that APC will not forget that youths will play critical roles in the coming elections. We have always been supporting the party, we will do more by next year. We appeal to our gubernatorial candidate, Alhaji Abdulrahman Abdulrasaq to consider one of us from the agitating bloc.

“We shall be grateful to him too, if his cabinet is largely dominated by young people.”

It is apparent that the leadership of APC in the state, under the chairmanship of Hon. Bashir Bolarinwa, has got its hand full and is compelled to turn in solutions in a manner reminiscent of 100 metres dash. This is in view of the contending forces and endless agitation among the all-powerful caucuses of stakeholders in the party.

Bolarinwa is from the largest local government in Kwara South senatorial district and a member of the foundation APC group of the APC in the state, who are equally of the belief that they had weathered the storm in the aftermath of the exit of the Senate President, Dr. Bukola Saraki.

Perhaps, with the backing of the Minister of Information and Culture, Alhaji Lai Mohammed, Bolarinwa and his cabinet would lay to rest, the myriads of agitations within a very short time.