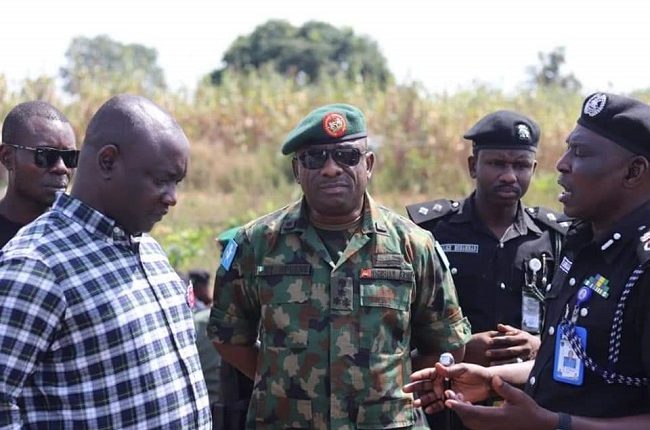 The Kaduna State Government has received briefings from security forces over Sunday’s attack by armed bandits along the Kaduna-Abuja road.

This was contained in a statement issued by the commissioner for Internal Security and Home Affairs, Samuel Aruwan, on Monday.

The statement noted that the Commissioner of Police, Abdullahi Mudassiru, alongside the Garrison Commander, One Division Nigerian Army, Brigadier General UT Opune, and the representative of the State Director, Department of State Services, Mr SG Shinkafi led other security agencies to the location at Kurmin Kare, Kachia Local Government Area, where the bandits carried out the attack which left one person dead and an unspecified number kidnapped.

According to the statement, the Commissioner of Police also informed the Commissioner, Internal Security and Home Affairs, Samuel Aruwan, that 11 citizens were rescued while one person, Alhaji Muhammad Sagir Hamidu, Chairman and CEO of Famaks British School, lost his life.

“The vehicle used by Alhaji Hamidu was recovered by the Police,” the statement added.

On measures taken by the security forces, the Commissioner of Police disclosed that more men and assets have been deployed to the route, adding that the efforts of the Police were being complemented by the Military.

The Commissioner of Police also highlighted the practice of driving against the flow of traffic as a major security threat, as it exposed travellers to the risk of ghastly accidents, and also created build-ups that could be exploited by bandits.

The Garrison Commander, One Division Nigerian Army, discussed measures being taken by the Military and assured the Kaduna State Government of their commitment to the security of citizens and commuters along the route. He explained that joint security operations were currently in progress in the state’s frontline areas.

Responding, the Commissioner, Internal Security and Home Affairs stated that Government was following the developments closely, having received assurances of commitment from the Police and Military.

The Commissioner reiterated the commitment of the Kaduna State Government by way of the continued provision of logistics and support to security agencies.

He described the attack as a setback, stating however that the Government of Kaduna State would not be deterred by this in its security efforts.

The Commissioner fielded questions from journalists on the shutdown of telecommunication services in frontline areas, explaining that difficult situations required difficult measures.

He disclosed that successes were being recorded as a result of the shutdown, which could not be explored in detail due to the sensitivity of operations. He pleaded with citizens experiencing communication difficulties to bear with the temporary measures in view of overall security advantages.

“The Acting Governor, Dr Hadiza Sabuwa Balarabe, received the briefings and sent her deepest condolences to the families of those who lost their lives in the attack, as she prayed for the repose of their souls,” the statement declared.

Verdict: The claim is false. The content of the article published by these online platforms is not new; it has been recirculated several times and has been debunked.Kaduna attack: Unspecified number of people abducted, 11 rescue ― Govt

Now is time for restructuring, all is not well with our nation ― Deji of Akure