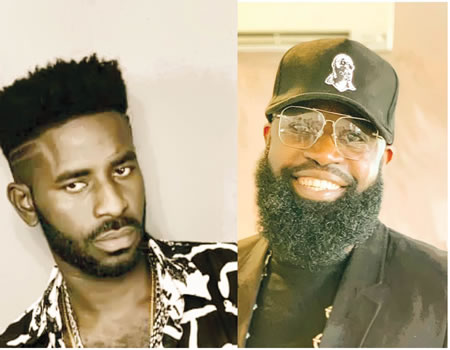 As fans were so much in a hurry to download the much-anticipated single from the multi-talented singer/producer, Eferurhobo Joseph, popularly known as Joey Benks, the tune has just dropped and Joey Benks did not disappoint them. Immediately after the song was released in the early hours of Friday, comments have started rolling him hailing the tight production and the vibe that came with the song.

In the said song, Joey had teamed up with UK-based Afro Pop sensation, Sean Dampte, Telemundo crooner, to deliver a great tune.

While speaking on how he came about the new content and it’s title, Benks said, “I draw a lot of energy from dancehall and Calypso and infuse afro in it. Rum Pom Pom is something a Caribbean artiste would do. I also listen to a lot of Shabba Ranks and the others… that’s how I came about the sound Rum Pom Pom.

Asked why he made the choice of Sean Dampte to work with, though they have a few great songs together already, he said he loved his style and vibe Sean Dampte brings and was convinced he could deliver dope lyrics.

“Yes, we’ve had a few great songs together and he’s a kind of person that when he hears a hit he recognises it one time. And I like his new brand of music. And I feel he could do justice to it which he eventually did without any question,” he added.

Benks, a twin, who hails from Delta State, but born in the brown roof city, Ibadan, started singing from age 12 in the church. His brand started getting attraction when he mentored a group as a producer to win then one of the then popular tv talent hunt shows, Star Quest. Then he was popularly called Joey Banks before he rebranded to become Joey Benks and started dropping hits.

Before star quest, Joey Benks was in a group called, SkoolBoiz. They released a mixtape called “The SkoolBoiz Chronicles” and did the “SkoolBoiz in Your Yard Tour” across the country, Nigeria and Ghana.

Joey Benks has also worked with the likes of Black face of the Plantashun Boiz, Krazy Kulture, Sean Dampte, and a lot of upcoming artistes across the country and has also released a personal track titled “E No mata” at that time.

But as Joey Banks, he had released tracks like “Nana” “Leave story ft. Rhyusjones” “Shoma damo” and “Zombie”.

Why Tummy cramp after childbirth is beneficial