I never slept with any producer for fame —Slay Queen 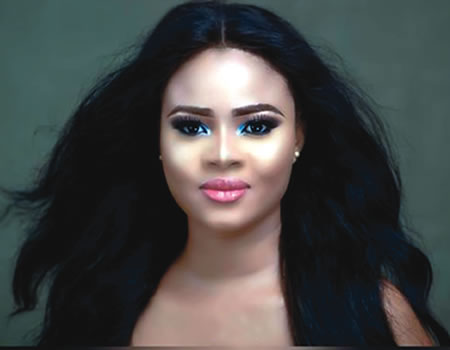 Yoruba actress, Opeyemi Ademeso, popularly known as Slay Queen, is gradually building a name for herself in the movie industry. Having appeared in a number of movies, the light-skinned actress says her career is about to take a new dimension. She speaks with SEGUN ADEBAYO about her career and what should be expected from her.

How did you come about the name Slay Queen?

Are you proud to be called a slay queen?

I am not a slay queen. Slay Queen was just a character in a movie and the title of the movie. The name has become a part of me. When I wanted to choose a story line, different ideas popped up in my head, but I fell in love with the idea of addressing a pressing issue in the society, which was the problem of Slay Queens and Slay Mama. I was inspired to write the story and shoot the movie because I wanted to address the problem and misconception about it all. That was how the name became a part of me.

You have been in the industry for some years now. What made you to go into acting?

Acting is a profession I fell in love with a very long time ago. I am very inquisitive, love entertainment and also like impacting knowledge, so I decided to pursue a career as an actress. I know I can use the platform to reach out to people and educate them more on morals, traditions and life as a whole. I fell in love with acting in my teen but you know how things work in this part of the world, you have to go to school and get a degree to satisfy your parents. So after I completed my NYSC in 2013, I decided to go into acting officially and I joined Shola Akintunde (Lagata) School of Performing Art. I have been trained to pick up any role as an actress, but I am willing to do that in a decent way. So I will always reject any role that requires me exposing too much or going unclad.

How would you describe the journey so far?

I have experienced the bitter and good sides of being an actress. One can’t avoid having the bitter and sweet experiences but you have to learn how to deal with every situation you find yourself.

Could you share some of the bitter experiences you have had?

If we start to talk about the bad experiences I have had, we would run out of time. I remember when I would go to location, well prepared but I would end up not doing anything for days. There were days you would even pray that you get what we call the ‘Waka Pass’ role, but you would not get it. In those moments, it could be hard keeping one’s head together because you would be frustrated.

Why were you not considered for roles then?

I don’t want to talk about that. Different reasons could be responsible for it but we have moved on from there.  I never allowed that to discourage me because I knew it was only a matter of time before I would be recognised.

Have you finally got to the top now?

No. I am still coming up but I am no more where I used to be.

Some of your colleagues have said that breaking into the movie industry is hard and that you have to  date a popular producer, actor or marketer to make a name for yourself. Did this happen to you as well?

I would say they are right to a large extent, but they forgot to add the fact that if you have your money, you can produce your movie and no one would offer you with what you don’t like.

But that does not make what is happening right or don’t you think so?

No one can force you to act against your will. I experienced something like that when I would go to movie locations for days and come back without getting movie roles. Despite the pressure then, I didn’t succumb to the pressure because I knew what I stood for and I won’t cave in under any pressure.  I know what I want and I cannot do anything contrary to the values I stand for. I am not in a hurry for fame and I am not competing with anyone, so I don’t feel any pressure at all. It is high time our girls changed that mentality of you have to date someone to be discovered. What some of those who fall victim don’t know is that new girls come into the industry every day. So if you allowed yourself to be used, another girl would take your place the next minute. I am guided by my principle, which is slow and steady wins the race.

Why is it that most of you don’t love one another?

This is a very sensitive question. I always tell my colleagues that but they are all in the industry for one thing: To be known and famous, but attaining that heights is not easy. When I see some people claiming to be friends in this industry, I just laugh because everything is not real and it doesn’t last. I have always kept it real on my end. I don’t keep friends in the industry but I do have talk mates and whenever they win, I am happy.

What is the biggest price you have paid to become a star?

I am not there yet, but I am positive and working hard to become a star, which I believe will be possible by the grace of God. I am giving it all it takes.  Giving up is not an option. Antidote to poverty is more work and grace of God.

Would you say you have enjoyed being a celebrity?

With the level I am now, I’m enjoying every bit of it. I can’t wait to be more famous and also enjoy all the goodies and privileges that come with it.

Would you settle down with an actor?

Yes, I can. What matters to me is my peace of mind and happiness.

Can we know some of the big movies you have done and how many have you produced so far?

What does being sexy mean to you?

I feel being sexy is a way of expressing one’s inner and outer beauty which is natural anyway but at the same time, a woman can be decently sexy. Most people tend to believe that to be sexy, you have to go almost naked or reveal vital parts of your body but it doesn’t have to be that deep before you can turn men on. You can be well dressed and still be sexy. Women should flaunt their endowment in a modest way with confidence because men love ‘covered food’.

Many believe that actresses don’t make good wives, what’s your take on this?

I keep asking myself this question all the time. Acting is a noble profession and I think it’s high time people changed their perceptions about actresses. Being a good mother or wife doesn’t have anything to do with one’s profession but one’s personality. We have many actresses that are happily married who are also good mothers to their children. So I do not believe being an actress will not make someone a good wife or mother.

As a beautiful lady, how do you handle men who want you?

I believe at this age, no man can get down with me without my consent. But it’s funny how most of these men come your way to entice you with luxuries and opportunities just to get down with you but trust me, I know how to deal with them. It’s only God that can save us because if you don’t know what you want and you don’t have the spirit of contentment, then one may fall for all these cheap lies clothed in luxuries.

What is your unique selling point?

I have got talent, but if it is physical, I know it is my skin. I get easily noticed not for my shape, massive boobs or ass, but because of my complexion and this has to some extent helped my career.

I sold ‘second-hand’ bread for survival in Lagos —Idris