I have no special presidential candidate —Obasanjo 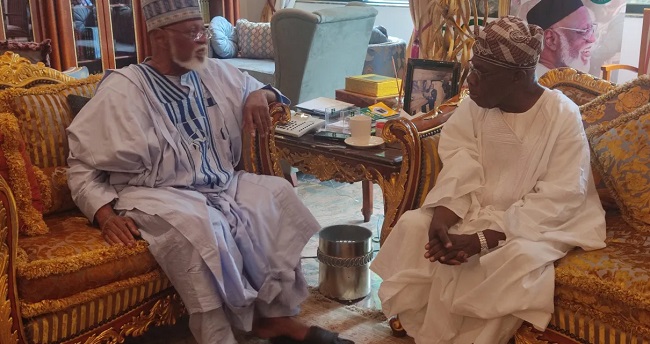 Former President Olusegun Obasanjo has said he does not have a special candidate in the 2023 presidential election in the country, but only has a national agenda.

Obasanjo stated this on Sunday when he paid a visit to a former Head of State, General Abdulsalami Abubakar, at his Uphill residence in Minna, the Niger State capital.

Obasanjo, who was responding to questions by journalists, said he was currently involved in a national agenda.

His comments came amid the general belief that he has endorsed the candidate of the Labour Party (LP), Mr Peter Obi, for the presidency in 2023.

“I don’t have a special interest in any presidential candidate of any political party against the 2023 general election in the country,  but I have a national agenda.

“I have come to see my brother who was a bit indisposed and when he was abroad I had wanted to visit him, and the day I arrived in London to visit him was the day he left.

“So I said, well, since I could not see him in London, I will come to see him in Nigeria. And so, that is what I have come to do,” Obasanjo said.

He described Abubabakar as “a  special  person in a way,” stressing that, “he (Abubakar) was indisposed, so I had to come and see him. If there is anybody again who is special and indisposed that I have to see, I will see him. I am still strong enough.”

The duo earlier had a closed-door meeting, which lasted for about 30 minutes in the inner chambers of Abdulsalami’s residence on Sunday in Minna.

They, however, declined to disclose what their meeting was all about as they refused to speak to newsmen.

Intrigues over emergence of LP gov candidate in Oyo