by Tribune Online
in Awo's thought
Reading Time: 3 mins read
A A 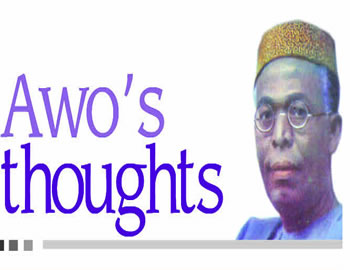 IT is generally agreed that the phrase DEVELOPING COUNTRY is a euphemism for UNDERDEVELOPED COUNTRY. The two phrases are synonymous. But for the sake of clarity, it is better to use UNDERDEVELOPED COUNTRY in place of DEVELOPING COUNTRY. To confine the latter phrase to economically backward countries is misleading and deceptive. No country in the world is stagnant or static. Every country is developing all the time, whether it is already highly developed, or terribly underdeveloped. Indeed, the so-called advanced or developed countries are, relatively, developing faster than the underdeveloped ones. The expression ‘underdeveloped countries’ is, therefore, more appropriate to distinguish those countries which are economically backward from those which are economically advanced.

A more or less arbitrary mathematical yardstick is sometimes used by economists to identify countries which are economically backward. If a country’s per capita national Income is equal to or more than one-fourth of the per capita national income of the United States of America, it is said to be developed. If it is below one- fourth, the country is said to be underdeveloped. But. if we should go by this arithmetical identification, wc would miss the true badges of economic backwardness, and the real differentiate of an underdeveloped country.

ALSO READ: How I made my fortunes ― Unilorin VC, Abdulkareem

The outstanding physical features of an underdeveloped country must, therefore, be stated. The most prominent feature is extreme poverty. In an underdeveloped country, both the natural and human resources are partly unutilised, partly underutilised, and partly misutilised, This non-utilisation, underutilisation and misutilisation of resources are wholly due to lack of adequate capital and technique, and to ignorance and poor health, leading to general inertia and want of the requisite enthusiasm on the part of the country’s labour force.

Such of the country’s natural and human resources as are partially utilised and developed are mainly foreign-trade orientated. This orientation is promoted and encouraged by foreign enterprises for their own benefits, and it automatically generates a system of dual economy in the underdeveloped country. A lot of unhealthy economic consequences follow. The resources which are devoted to the production of export crops are comparatively better developed than those which are devoted to the production of domestic goods.

This difference, in material rewards; induces the economically active sections of the community to ignore the cultivation of crops for domestic consumption in favour of export crops. The country itself becomes dependent on foreign trade for its economic sustenance.

In order to pay comfortably for the primary produce imported by them, the foreign entrepreneurs deliberately stimulate in the more prosperous sections of the underdeveloped country an inordinate propensity to import. The resultant effects of his unwholesome Foreign-trade orientation, in the underdeveloped country, are un favourable terms of trade, unstable export markets, and a persistent adverse balance of payments.

It is common knowledge that any form of economic activity or development demands, in addition to natural and human resources, the existence of adequate capital as well as technological and rmnagerial competence. All these, as we have hinted, are very insufficient in an underdeveloped country. Adequate capital is lacking because savings per capita are low, and savings per capita arc low because technological and managerial knowledge is either nil or hopelessly deficient, and because the masses of the people are ignorant, and unhealthy, and hence economically unenthusiastic and undisciplined. In order to make up for these basic deficiencies, an underdeveloped country always strives to excel itself in creating a congenial and over-generous atmosphere for attracting Foreign capital as well as technological and managerial personnel. I n this process, it makes itself more economically subservient to foreign interests.