How SARS operatives hanged me from ceiling, tortured and broke my leg, Electronics dealer recounts 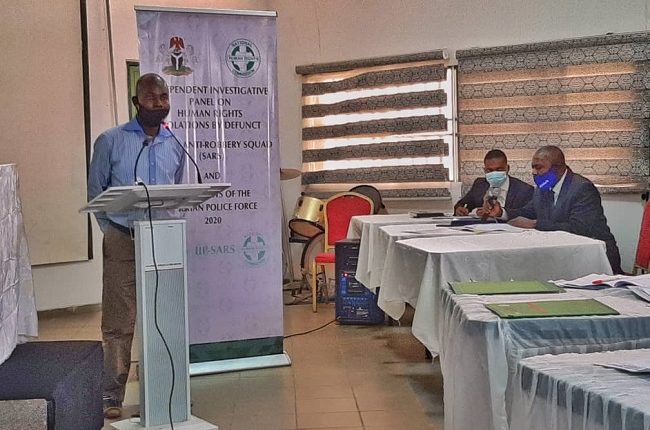 An electronics dealer, John Ogbu, on Friday narrated to members of the independent investigative panel on human rights violations by the defunct Special Anti-Robbery Squad (SARS) and other units of the police of the National Human Rights Commission (NHRC) his near-death experience in the hands of SARS operatives in Abuja in 2018.

Ogbu narrated his ordeals with the SARS operatives, which led to his leg being broken at the Abattoir office of the dreaded squad while the panel heard the petition he filed before it.

The petitioner, who said he was dealing in new and second hand electronic and home appliances at Gwagwalada, Abuja, told the panel that at about 3 pm on April 24, 2018, a man he later identified as Inspector Edwin Kendiry came to his shop with a stranger who claimed that he sold stolen electronics to him (Ogbu).

According to him, “Immediately the stranger pointed at me, Inspector Edwin carried nine television sets from my shop without explanation and thereafter, he handcuffed and took me away to Gwagwalada Police Station.”

He told the panel that when he was interrogated at the station, he insisted that he had never seen the stranger before that day, adding, “this infuriated Inspector Edwin, started beating me.”

The petitioner informed that he was detained for two hours at the station before he was taken to the popular SARS’s Abattoir office.

Ogbu said the next day he was taken to the SARS torture room where his arms were twisted to the back, chained to his legs and were bent behind from the knees.

He added that he was then hanged from the ceiling and beaten continuously with dangerous weapons by SARS operatives led by Inspector Kendiry.

The petitioner further told the panel that after he was severely tortured, he discovered he could not walk again, adding that he was released two weeks later, after which investigation revealed that he was wrongly accused.

Despite being exonerated of the offence, he was wrongly accused of, Ogbu said he was still granted bail in the sum of N150, 000, thereafter, he was taken to the University of Abuja Teaching Hospital (UATH), Gwagwalada, for medical examination.

According to him, the x-ray carried out on him confirmed that the bone in his right leg had been broken, adding that he had to undergo surgery at the Allied Hospital in Gwagwalada at the cost of N400, 000, to fix his leg.

Asked what he wanted the panel to do for him, the petitioner said he wanted to be compensated for the cruel and inhuman degrading treatment he suffered and for the injury to his right leg because he still walks with iron within his leg and the losses he suffered when his goods were carted away.

Meanwhile, the acting chairman of the panel, Garba Tentegi, SAN, who stood in for the chairman, Justice Suleiman Galadima (retd), adjourned the panel petition till March 15 for the continuation of hearing.

He ordered the first respondent, Inspector Edwin Kendiry, to appear before the panel on that day.

The British Parliament at the Westminster Hall held a debate on ‘e-petition 554150, relating to Nigeria and the sanctions regime’ on Monday. The government of the United Kingdom has however responded…How SARS operatives hanged